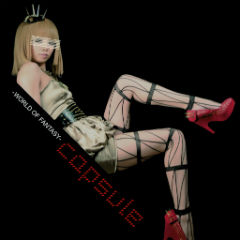 Capsule used to be a Shibuya-kei duo back in the day, blending the sounds of 60s Francophilia with 90s mall Muzak eclecticism. Then, to the delight of some and the horror of others, the duo went all electro, sacrificing cute and chirpy for cold and concrete. Sometimes it works, and sometimes it doesn’t, and listening to their albums can make you wish someone would remind these two that no one listens to techno, and hasn’t done since Madonna got in on the act.

Capsule aren’t really a good representation of all that’s cool about Tokyo therefore, or all that’s cool about dance music in the 2010s, with dubstep taking over England and Ed Banger Records frying up French house, but I’m pleased to say World of Fantasy is still an improvement on last LP Player, simply because it dares to veer away from that album’s tired template of electro bangers, identical as it was to everything Capsule have made in the last five years. It only veers a little bit, mind you.

I Just Wanna XXX You apes MIA over post-Guetta house beats, while Keep Hope Alive sounds like an 80s TV theme designed to keep the kids happy, yet scared behind the sofa. I Can’t Say I Like You even mixes up 90s rave pads and twinkles of cowbell. Unfortunately though, as usual, most songs outstay their welcome, looping the loop far too many times than is necessary, and yet again nothing comes close to their 2007 classic You Are The Reason. Just listen to that track to realise what Capsule are capable of. Still, I’m tired of waiting. I’m done with this band.

Preview on Xiami.com | Like it? Buy the album on YesAsia