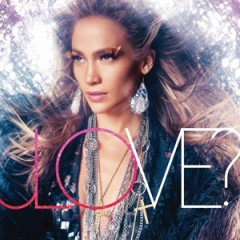 Jenny from the block is enjoying quite the comeback.

Serving as a nu-Paula judge on the disgustingly popular American Idol, and being crowned the most beautiful woman in the world by People magazine, J.Lo is taking back her crowns in Hollywood. For a 41-year old matron with two kids and almost 20 years in the industry, damn, she’s looking gorgeous. But her beauty isn’t translating well musically.

The underappreciated Louboutins of ’09 was supposed to be the kickoff to her kickass comeback album, supposedly due in 2010. There were announcements of A-grade producers backing up the projects and leaks of promo singles. But the project fizzled faster than Nicole Scherzinger’s solo career (which has now surprisingly picked up).

So you’d think Love? would sound amazing, after years of incubation. Instead, Jennifer Lopez’s seventh record is a basket of half-baked pop/R&B ideas. Trying to seep into the current euro-club sound, none of the tracks really take off.

A shame, since the lead single On the Floor is all kinds of dancefloor decadence. Pairing up Latino rapper-on-demand Pitbull, the track samples the lambada, tweaking it into epic clubbing proportions. It’s an unmistakable ode to the age old combination of dancing and drinking – an obvious summer staple for the mainstream.

R&B stomper (What Is) Love? samples Nelly Furtado’s All Good Things (Come to an End) for a catchy Rihanna-esque mono-syllabic. It’s not groundbreaking #1 hit single material, but it’s a bright spot in the blandness.

Love? isn’t meant to be comedic, but hearing the mother of twins sing cheese like, “flip it, slap it down, it’s gonna get nasssty” on Hypnotico is just… gloriously laughable. Shouldn’t she be changing diapers?

All the other tracks are half-cooked attempts to cash in, thanks to frantic synths and hip-swinging backbeats – neither hit the swagger hitmakers like Lady Gaga and Rihanna are bringing to the game. J. Lo drones on each song, washed heavily in auto-tune and vocal prettifiers, making her sound like a half-Britney.

If you’re going robo-pop, take that direction and run with it. Don’t half-heartedly decide that an unconvincing vibrato is required to make a good pop song. Britney Spears’ Femme Fatale: robo-pop at its finest, an unabashed ode to the magic of audio technology. Love? is playing on the fence, and falls over its own awkwardness.

Unfortunate for Jenny from the block, so many were rooting for her re-reign in the pop scene. Guess it’s a good thing she’s gorgeous.