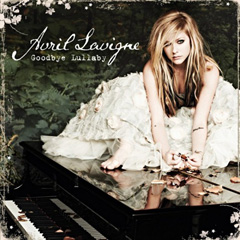 There was a point in Lavigne’s career when people actually saw something. Almost ten years after she exploded onto the scene with that pop rockish Complicated, her fans have moved on, and she’s still in the same musical place, often adored by 13-year-olds who dig the guitar strums and the semi-love songs, and are not into the now Miley-types. So what happened?

Avril Lavigne seems to know how to handle her pop tunes and her pop-rockish hooks, often sounding the same, but still being catchy enough to get you to feel guilty over having one of her songs on your player. Goodbye Lullaby is more of the same, except she curses a lot more in her songs like Wish You Where Here and Smile, making her sound like an 8-year-old who’s found out that she can say bad words.

If Goodbye Lullaby had been a debut album from an up and coming new idol, it would totally be interesting with her dark fairy-like themes opening and closing the album — except the album closes with Alice. But from an almost 30-year-old, it seems pointless. Maybe Lavigne should be looking into getting another job… or will she be doing the same rebelling teenage girl theme until her 50s?