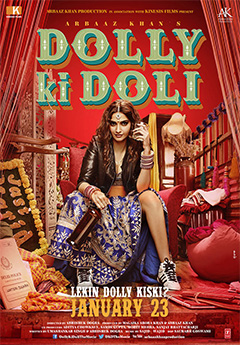 Jenna and I aren’t exactly big fans of Sonam Kapoor- in fact, you’ll probably be hard-pressed to find any film lover who’ll champion her as the next big IT, but… she gets so much flack, I’ve started softening up. Plus, she wasn’t too bad in Khoobsurat, so I wanted to give Dolly Ki Doli a try. There’s also the Rajkummar Rao factor.

Meet Dolly (Kapoor) in a Bunty aur Babli meets Dawaat-e-Ishq meets Runaway Bride with a flare of Queen as the Looteri Dulhan (aka. The Plundering Bride) who’ll con men wanting to marry a young and beautiful (sometimes docile, sometimes wild) bride by stealing everything valuable they own on their wedding night, fleeing with her fake family- protective father Dubeyji (Joshi), her mother Mrs. Dubey (Zeena Bhatia), brother Raju (Zeeshan Ayyub), Dadi (Rajani Vaidya), and their other aids.

After conning sugarcane entrepreneur Sonu Sherawat (Rao), cop Robin Singh (Samrat) is on Dolly’s and the gang’s trail as they set their eyes on the dimwitted Manoj (Sharma).

The biggest fault in Dolly Ki Dolli is that Sonam Kapoor is not one of those actresses that shine even in bad material, though the film clocks at an astonishing 1.37hr making it the shortest Indian movie I’ve ever set my eyes on *slow claps* — it feels long and insufferable at times when we begin our focus on the momma’s boy Manoj, though Archana Puran Singh (Miss Breganza in KKHH) is a hilarious nightmare here. She actually gives Sonam her best scenes- as Madhuri Chawla. She even entertains in the number for Phatte Tak Nachna [Clip], even though it gives similar vibes as Engine Ki Seeti [Clip] in Khoobsurat. Is it me or does she downs those gulps of alcohol like its nothing? Ugh, such a double standard when Anurag Kashyap’s films are plastered with smoking/drinking/doing drugs is bad for your health notices.

The biggest surprise in Dolly Ki Dolli is that is not a moralistic entertainer- it doesn’t have the moment of light like in the con rom-com musical Bunty aur Babli, where the heroes see the errors of their ways, it doesn’t preach social messages, and its unapologetic for its heroine going beyond that enlightening moment Rani realizes she doesn’t need to be married to Rajkummar Rao’s character in the biggest revelation of 2014 Hindi cinema… so maybe Dolly has something.

But please, Sonam, speak more with your eyes!