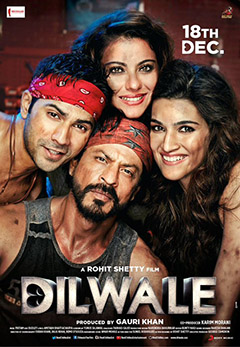 It’s been a month since the release of Dilwale in India; five Filmfare Awards nominations (two of which are laughable acting nods) and a surprising slight defeat at the Indian Box Office, though Rohit Shetty’s latest masala has reigned supreme overseas as the fourth highest earning Indian film of 2015, trailing just behind Shahrukh Khan’s Happy New Year in 2014 in the overall gross figures; it lost business to Bajirao Mastani [Trailer][1][2][3], which opened on the same date and now just trails behind a couple of millions, as it awaits release in China for a reported 6000 screens opening [1].

So while the Anglo world lost its head over The Force Awakens, Bollywood followers were losing theirs over this clash over number of screens. Sane people, like yours truly, were just waiting for both to do good business. Oh, who am I kidding? I just wanted Bhansali to not lose money because that would deter him and others from making more films of grand scale. Why would anyone want that?

Rohit Shetty releases his kind of shenanigans once a year, and Dilwale is actually his second release in Latin America (Peru) since Chennai Express, which was actually a world premiere. Back with lucky charm SRK, the project also played with people’s nostalgia by bringing back Kajol on screen since the animated film Toonpur Ka Super Hero and We Are Family in 2010. Fans expectations were high, as they were bringing back the couple that set their screens on fire on K3G (despite My Name Is Khan).

The less known about the actual plot, the better… but Shahrukh Khan plays Raj, a -sorta- common man with an auto shop, who alongside his younger brother Veer (Dhawan), get embroiled with a silly drug kingpin known as King (Irani). Somehow people manage to fall in love, and we learn their backstories. The inherent problem with Dilwale is that it’s a 90s film with modern aesthetics, while something like Dum Laga Ke Haisha is a modern film with 90s aesthetics. The humor here is dated; Johnny Lever is the token uneducated common man who’s neither good looking nor “fair” enough to be a hero, always reduced to a shrieking thief or thug, and never to be taken seriously. Varun Sharma, who plays Veer’s best pal Siddhu, is also as terrible– both characters as thieves because one’s an uneducated man with no options that has to take care of his younger brother, and the other a young man who has to steal because paying for dates is a chore (Hinglish pun not intended). And the fact that people keep calling Varun Dhawan the next generation Salman Khan doesn’t feel like a compliment, Best Actor nomination for Badlapur notwithstanding.

Cringe-worthy performances of all the main cast aside, fans of Shetty’s car-chasing blow’em-up style might find elements to like despite the long-winded storytelling of she-loves-me-she-loves-me-not-she-shoots-me-she-shoots-me-not. There’s some worthy action direction there in charge of Grant Hulley, who has been a stunt coordinator in Age of Ultron, Chappie and my favorite Dredd. For the lovers of the musical romance, though Gerua [clip] is the looker image of the whole movie, shot in the CGI-looking magical landscapes of Iceland with Farah Kahn as the choreographer of the wind-machine sequence, the big winner track is Janam Janam [LV][short clip], which feels as its own and not a second-tier Suraj Hua Madham [clip].

Overall, though, a film like Shaandaar might have been a crazy mushroom trip at times, at least it wasn’t as boring. It’s sad because 2015 was a pretty darn good year for Indian cinema in general — Bajrangi Bhaijaan, Baahubali, Piku, Bajirao Mastani, Dil Dhadakne Do [1] — but we’re stuck selling these in non-NRI markets spoiling the region for other titles.