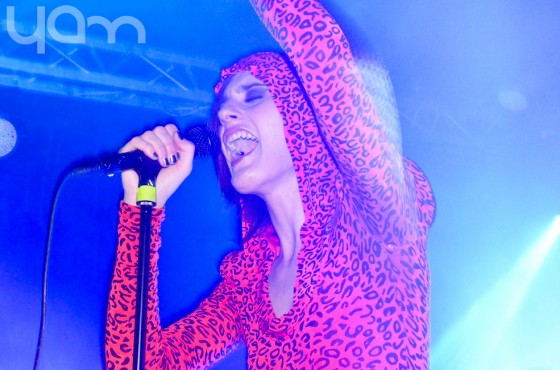 I was trying to take pictures when I was hit very hard on the back of my head. This couple standing beside me where dancing very outrageously. They went ape-shit crazy from the moment Yelle stepped out until the end of the gig. They jumped, they danced and they kept hitting me in the head (or knocking down my camera).

Just 30 minutes before, Lune had warmed up the crowd with her cute antics and somewhat indie/rock music. She managed to get the crowd excited as she jumped and danced around the stage. She paved a very nice way to the main act with her solemn yet energetic songs.

Club Popaganda is an indie darling in the Stockholm music scene. With their very famous Popaganda festival — held every year at the end of summer (which we covered live this year via our Twitter and Facebook) — they always manage to bring the best indie/alternative acts to the Swedish capital. When Yelle was announced, the hype was high. She has played in Sweden before and her reputation as a great live act is widely known. Anyone that has seen her live has nothing but great things to say.

So it wasn’t a surprise that an hour before the gig the line outside the club was long. But the club isn’t that big so around 800 lucky people were able to enter. Which brings me back to the very passionate couple beside me. They weren’t the only ones going nuts — the entire club was dancing, screaming, throwing their hands in the air and trying to sing along in French. From start to finish, no one stood still. But then again, Yelle is very energetic live. She comes out and demands that you “shake your hips, Stockholm!” in her sultry French.

I must admit, I wasn’t that happy with Yelle’s latest album, Safari Disco Club, so I wasn’t counting on enjoying those songs too much. How wrong I was. It didn’t matter what Yelle sang as long as she just did. It wasn’t hard to bump along to the electronic beats and surrender to her charm. She could have been singing “Frere Jaques” and I would have danced along.

In all, a gig that left me beyond happy. Yelle’s music really has to be experienced live. The albums really don’t do her playfulness and quirkiness justice.

Yelle is currently touring around the world. For more information about her upcoming concerts, visit her official site.