Kiss of the Damned 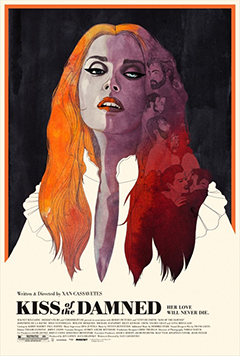 However much I hate to suggest the idea of style over substance, it’s one that often pops up in films. Kiss of the Damned is just one of many films deserving of said label, but it’s not necessarily all that bad.

At this point in time, we already know everything there is to know about vampires. Sex, blood, and on occasion romance. For Djuna (La Baume), love is in the air when she meets screenwriter Paolo (Ventimiglia) at a video store. Their relationship kicks off with the usual allergy to sunlight excuse that plagues most vampire romances along with lots of hesitation.

It doesn’t take long for it to kick off into a frenzied whirlwind of sex that inevitably leads to his transformation and a monogamous relationship. Predictability further latches onto the story when her renegade vampire sibling of sorts Mimi (Mesquida) steps in, only to stir up drama and a love triangle that could potentially ruin the life they’ve established.

Xan Cassavetes has a clear knack for making a film look wonderful, which is no surprise considering her father John’s work, but there isn’t much beneath the surface. Kiss of the Damned has all the makings of a seventies cult feature with a modern touch, and would be particularly memorable had the story not been all that bland. There is at least some decent dialogue spread throughout the not so interesting tale, the best of which comes when Cassavetes embraces humor.

Nearly everything about it is damn gorgeous, from the costumes to the blood that covers these characters from time to time. It’s a great-looking film, but the few moments of cheesy, over the top seventies goodness offer a nice contrast to pure and sometimes boring elegance of everything in the film. Scenes that take place in darkness with color filling the night are the true highlight of Kiss of the Damned, reminiscent of the sort of style you might find in a good old giallo.

Similarities to Tony Scott’s The Hunger are undeniable, and yet it doesn’t feel quite at that same level. The sex is abundant, though not particularly inspired, inevitably feeling a lot colder than it probably should. This could be attributed to the actors however, who regardless of great looks, aren’t particularly adept at emoting. If any could be said to stand out, it’s Roxane Mesquida, as watching her tempt every other character is just plain delightful.

As tired of a tale of vampirism Cassavetes weaves, Kiss of the Damned still makes for a decent watch with some cool scenes and a sweet look. If only it had a little less class and a lot more desire and grit.