Wo Yuan Yi I Do 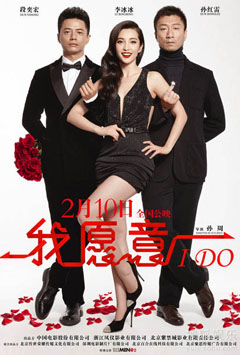 China, stop it with the mismarketing! [1]

If you had followed some of the promotion of this Chinese production, you would know that the trailer hinted at a balanced dramedy/romance. However, just guided by this poster, you would think I Do is a superfluous vapid romantic comedy.

Or maybe Li Bingbing is that good at squeezing material out of it, playing the successful Beijinger sales director, Tang Weiwei. Already in her mid-30s, her friends are expecting their babies, getting married or on their way to getting married, but Weiwei is not preoccupied with such affairs, but her friend Xiaoling (Xue Jianing) — expecting her first baby — is eager for Weiwei to find herself a man.

What do they do? Weiwei (and Xiaoling) sets up a blind date… several blind dates — same place, same time, different prospects. One of them is Yang Nianhua (Sun), who sticks around long enough to strike a bizarre conversation with Weiwei, who has been guarding off ever since her long-time boyfriend, Wang Yang (Duan), vanished from her life.

Sounds like a typical Hollywood rom-com where two guys fight for the affections of a girl, right? Wo Yuan Yi I Do has all the makings of a Hollywood production: glossy, pop music, and product placement, alright. However, the story it tells goes beyond. The characters are complicated. For instance, Li Bingbing’s Weiwei goes beyond the workaholic b!tch stereotype looking for somebody to love her. She had dreams and letdowns that make her the character we meet, we get why she guards herself, why she thinks the way she does…

The most surprising feature on this romantic dramedy, however, is its male character build-up. Men in rom-coms are usually reduced to what women want them to be in their dreams — be it an ex who is a jerk, or a future Prince Charming. In I Do, Wang Yang is the ex-boyfriend, we are supposed to hate for hurting our leading lady, but Wang Yang had dreams and letdowns just like real people do! We understand him even more than we understand Nianhua, who, by the way, falls into that sketchy category of almost too perfect, but it works for him.

There’s a very VERY telling line in the film, after a dramatic revelation, when Weiwei says that she probably doesn’t understand men too much, but she understands women a little.

In the end, this unlikely “rom-com” is worth your time… even if the last ten minutes or so of the film aren’t exactly satisfying, as they feel forced with a sudden revelation — and an ending scene that… it’s WAY too open for a romantic tale. However, it’s true what Nianhua says… does it really matter? That he wasn’t exactly what we thought he was?