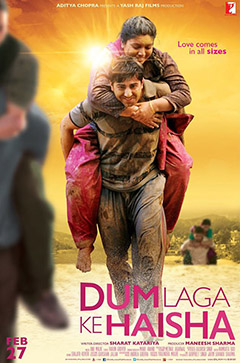 I have a hard time thinking right off the bat in mainstream films with an overweight (or slightly one) female lead- Hairspray comes to mind, of course, as does (kinda) Muriel’s Wedding, some of Queen Latifah’s or (as of lately) Melissa McCarthy’s starrers though less highbrow or popular than the others, later we get to the fat-suit ones like the fan favorite Korean rom-com 200 Pounds of Beauty or Johnnie To’s early millennium Love on a Diet. If we switch to television, we only recently got Mike & Molly — McCarthy’s hogging the market and Hollywood doesn’t know anyone else — and further back with Drop Dead Diva… and further back with latino fat-suit hit Mi Gorda Bella, which was ultimately remade into the mandatory Mexican version Llena de Amor, a Malaysian one titled Manjalara, and India’s very own Dekho Magar Pyaar Se.

Yup, in an industry that’s so focused on looks, I even have a hard time thinking of an overweight male lead, so I guess- Kevin James, props to ya. This time around, one of Bollywood’s candy-makers YRF lets filmmaker Sharat Katariya (who was one of the writers in Titli) work with a certain cast of pedigree– Sanjay Mishra and Seema Pahwa both had a successful 2014 with the critically-acclaimed Ankhon Dekhi, and outsider relatively-new-face in town Ayushmann Khurrana who hit it big with the 2012 surprise hit Vicky Donor, for a story about an arranged marriage between a high-school drop out boy and an overweight educated girl set in 1995 Haridwar to bring on the best of 90s Bollywood Anu Malik music and Kumar Sanu’s voice.

For this they also introduced Bhumi Pednekar, an assistant casting director for YRF [1], as the caring straight-forward no-BS Sandhya who is stuck in a marriage from hell because her hubby Prem (Khurrana) doesn’t find her attractive. However, Sandhya tries hard and everyone else try to make the most of it making Dum Laga Ke Haisha skate away from run-of-the-mill rom-com territory to settle as a modern dramedy of 90s aesthetics. It never darts into the embarrassing moments of 90s Bollywood, but it hits all the right notes for the ending credits in Dard Karaara [clip]. I loved that throwback to bits.

Despite the importance of its female lead, and the fact that YRF has Bhumi for a three-film deal, DLKH is ultimately a Hero’s journey and I’m happy to say that Khurrana is up for the challenge. I wasn’t a fan of his debut and his earlier 2015 release Hawaizaada [Trailer] didn’t convince. In here he’s unlikable, for sure, unlike regular Bollywood Heroes- he’s stubborn (on top of being uneducated), he isn’t a looker, has pretty rotten luck… all he really has going for himself is the cassette shop his family owns at the turn of the CD-era… and people point all these out like fault, unlike the heroes of yore. Wake up, kids! You aren’t going to get a bashful virginal beautiful damsel in distress (from a good family) who will stand for your crap personality. Sandhya as a good 90s Bollywood Indian bride will try her best, but as a modern educated and headstrong woman, she wouldn’t stand it. The film rushes a bit after that, clocking at less than 2hr., so it seems like Prem’s evolution happens too quickly, after all he does spend most of the film mad at everyone but himself.

And boy does everyone play roles~ Mishra gets to shine the most as the -surprisingly- forgiving father-in-law who seems to be the only one (sort of) on Sandhya’s side, who is often ostracized by her mother-in-law and specially Prem’s aunty (Chaddha). It gives a spin to the usual Men vs. Women on film battle that seems to bore certain people– it’s also shown in this year’s other powerhouse female performance (so far) in Anushka Sharma’s NH10. My only complaint with DLKH is that our Heroine doesn’t get a full arc… because, well, she’s already pretty perfect as she was.

But man, did the film left me with a stupid grin on my face.

You can listen to all of the songs on the YRF Jukebox.