Love in a Puff 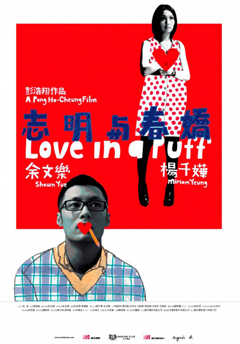 Who could have thought that smoking could be… so sweet?

On the outside, Love in a Puff is a romantic tale about a guy at a marketing company named Jimmy who meets a cosmetic sales girl from a nearby mall named Cherie, while they’re taking a smoke-break.

Within its core, the film is about two people that fall in love within a city. The best comparison I could make is that if there were such thing as a version of Hong Kong, I Love You, a film like Love in a Puff would be the perfect setting for a short. The film is about the city and its smoking ban policy, just like it is about this couple… and if you’ve ever been to Hong Kong and/or have many Hong Kong friends, you’ll feel even more at “home.”

The developing interest between both Yeung’s Cherie and Yue’s Jimmy is sweet, without it being saccharine. It’s got enough bittersweet situations to make their interaction real, and it’s got plenty of laughs… which is funny, considering the film was categorized for adults for obvious sexual reference, but is not explicit at all.

Director Ho-cheung Pang continues a generally good strike of interesting films, with works such as Exodus and Isabella, managing to get natural performances and dialog from his performers, as well as a true building relationship between the two.

Love in a Puff is one of those film to watch on a summer afternoon… preferably outside, just as if you were watching Cinema Paradiso, you might be surprise how enchanting a movie this is.