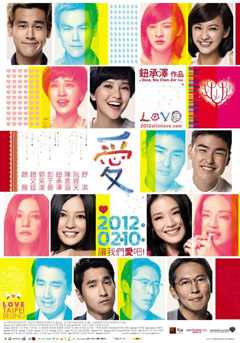 Multiple love story movies have been done to death recently with the crazy idea that the more “star” names you get on a poster, the more people you will get to pay for it. We can probably thank Love Actually for vapid romantic comedies like Valentine’s Day, New Year’s Eve and, perhaps, He’s Just not That Into You.

However, the comparison to these films ends at that. Ai Love has multiple layers to its story that none of them had, making Doze Niu’s follow-up to his gangster drama a complex dramedy about various types of love in contemporary China-Taiwan relations.

The film begins when a worried Li Yijia (Chen) realizes she’s pregnant with her best friend Ni’s (Kuo) boyfriend’s baby. Cinema-loving Kai (Peng) can’t deal with the fact that he betrayed his girlfriend with her best friend and rides off on his bike. He runs into Mark (Chao), a wealthy businessman who’s already running a bit late for a rendezvous with sexy Zoe (Shu Qi) at a high class hotel.

Famous for living off of rich men, hotel employees begin a rumor that Zoe’s feet stink. But that’s no problem for good-hearted Kuan (Ruan), who works as a waiter at the hotel, as well as other part time jobs, including helping at his family’s restaurant.

Among the handful of characters in our story, Shu Qi seems to be the most at ease with her role alongside Ethan Ruan as the stuttering Kuan. Their chemistry is sweet and almost electrifying — both characters trying to step outside what they’ve been all their lives. Though Zhao Wei and Mark Chao’s storyline don’t fit in as nicely as all the other characters’, it is they who bring the concept of “parent love” to the forefront of Ai Love.

While Mark is unable to love — as Zoe reprimands him — because he doesn’t want to have to miss anyone in his life, Xiao Ye pushes people away because she’s been hurt before and doesn’t want her son to be hurt the way she was. When Doudou mistakes Mark for his father who left him before he was born, Mark is forced into a relationship that he never envisioned having. It all comes full circle for him almost at the end, don’t worry.

The parent-child relationship is also enforced in Ni’s storyline. She resents her father for being with “that” woman. Zoe’s own reason for living like she’s been is also attached to her relationship with her parents. Meanwhile, Li Yijia has to deal with her unborn baby and her own family — who, by the way, are the picture perfect older Asian couple: “- I’m definitely divorcing him this time. – You love him so much. You’ll never divorce him. – This is my secret. Don’t tell your dad, okay? He might take advantage of it.”

Despite Ai Love being disguised as another multi-story run of the mill romantic comedy, it might actually be a film about the love that we receive growing up from the people around us and how it shapes us into adults that are able to give love to others in the future.