Love in the Buff 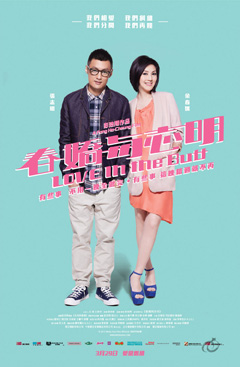 Hong Kong director Ho-Cheung Pang relocates his Hong Kong romantic dramedy to Beijing. Our lovers (unsure of the solidity of their love, like all young couples) back off of each other’s business when Jimmy (Yue) is promoted to a new job in Mainland’s bustling capital city, and he and Cherie (Yeung) decide to part ways. Set apart by thousands of miles now, Jimmy and Cherie try to go through their lives as if they haven’t lost anything important — Jimmy begins dating a cute flight attendant named You You (Mini Yang) until the day Cherie is transferred to Beijing.

Love begins to be troublesome, as Cherie tries competing (to no avail) with the petite air hostess and avoiding any other serious commitment until she meets Sam (Zheng Xu), who might be the only way to forget about Jimmy. But the heart wants what the heart wants in Love in the Buff.

You know when you have friends who make questionable decisions about their relationships, and you’re all of a sudden in the middle of it? That’s kind of how watching Love in the Buff was for me, for better or worse. It’s a good quality for its immersive storytelling and speaks loads on the depth of the characters and how real they seem, but it can also be frustrating. There’s a lot of cheating going on around this one, and a lot more guilty-watching than there was in Love in a Puff. However, it all works. Though, I think the biggest success in Love in the Buff is to never paint You You or Sam as victims or as not “worthy” for our leads, and considering how one might have pegged You You as “a little” too clingy and somewhat an overbearing girlfriend, she surprises you by the end.

Shawn Yue gets the hardest role because Jimmy is some kind of a jerk in here. He doesn’t plan on it, but his immaturity seems to hurt a lot of people and gives Cherie her reason for wanting to move on. However, Jimmy delivers during the story and after the credits with a positively hilarious rendition of Linda Wong’s Don’t Ask Me Who I Am (別問我是誰) [MV], which reminds me that Love in the Buff has loads of quite funny cameos, and as such they are best enjoyed when you know what they’re talking about, like in Chinese actor Huang Xiaoming’s case playing a Huang Xiaoming-looking love prospect, Ben.

Though Love in the Buff lacks the romantic aspect that its predecessor had, this one packs on the laughs and the drama. I don’t remember having laughed this much when watching Love in a Puff. Is it wrong that I felt Miriam Yeung’s role had the most comedic moments? Be it having to measure up to You You from the point of view of two straight-faced and heavily blunt young Beijingers, hanging out with her boss Olivia (Kristan Tin), or with her Hong Kong pals… including Brenda (June Lam).

Overall, I think this sequel can be quite on par with its first movie. Despite the lack of whimsical romance and its love affair with the city, Love in the Buff gives Love in a Puff a good kick to end this couple’s love story.

Also, was it just me or was there a little Hong Kong/Beijing friction in our characters’ interactions?