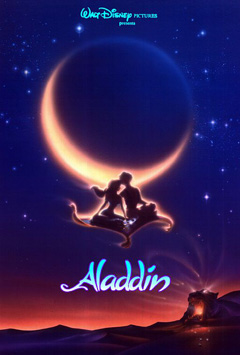 In this review of Ginger Snaps II, Mirella asked for #9, which resulted in Disney’s pop-culture ridden version of Aladdin. Before Dreamworks had ever decided to floor us with pop culture references in Shrek, and specially Shrek 2, Disney had given us the masterful line delivery of the one and only Robin Williams as the A.D.D Genie of the Lamp. I can only imagine what a great source he was for all the animators that worked on Genie, despite the anachronistic ad-lib, all of Williams scenes are outstanding.

For those not familiar with the story, it’s about an orphan boy named Aladdin (Weinger, remember? Steve from Full House) who accidentally meets Princess Jasmine (Larkin) as she has escaped the palace because she doesn’t want to be forced to get married. To the bad luck of Jafar (Freeman), the power-hungry Royal Vizier who wants to possess the Sultan’s (Seale) throne, Aladdin is the chosen one to enter the Cave of Wonders, where he is to find the magic lamp that will grant him three wishes.

As per Disney tradition, Aladdin has a string of excellent musical numbers — that’s only, like… 15 minutes of the film, surprisingly — with the pop Disney staple of A Whole New World. It also has that Arabian-esque Arabian Nights (with a Merchant also voiced by Williams), the swing Genie presentation of Friend Like Me, and the grand introduction of Prince Ali, however, it’s probably Jafar and his parrot lackey Iago (Gottfried) what pushes Aladdin into Disney Classics territory- Great baddies and amazing songs!

The pacing of the film is amazing, just under 15 minutes, you know everything you need to know about Princess Jasmine, Jafar, Aladdin and the Genie, as no scenes or songs are there as filler content. And considering the team involved in the story, it would be shocking to find it lacking. Ron Clements and John Musker had been in charge of The Little Mermaid prior to this one, and they eventually ended up directing Treasure Planet, which shares action adventure visuals with Aladdin. While watching the scene in the Cave of Wonders, as Aladdin is trying to escape with Abu on top of the Magic Carpet, seems like a precursor of the “solar surfing” scene in Planet.

Though, Disney keeps been kicked down for its different depictions of other culture; with Mulan combining Japanese visuals into Chinese culture, The Emperor’s New Groove with its Mexican elements into Incan society, and The Princess and the Frog making it a big deal about an African American princess when the not-a-princess is a frog for most of the movie; at least Princess Jasmine has a personality. She’s not boring like Snow White, she’s not as naive as Aurora and she’s certainly not victimized as Cinderella. You gotta pick the bits where you can win.

Despite its focus on getting Princess Jasmine to marry, this is a boy’s tale — a little less so than Planet was — that combines romance quite well, so EVERYONE wins on this one. It’s an exciting adventure with magic for boys (and girls not interested in romance), great jokes for grown-ups, and a dash of romantic magic for the hopeless romantics.