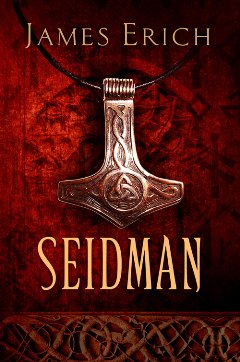 The heart of a slight young man is tested and stretched beyond comprehension as he tries his best to harness his fledgling spiritual power and survive the harshest years of his life. His heart belongs to someone whose family is his most prized possession; however, the bond between the two of them is so unshakeable, not even Freyja herself could deny its power.

Kol Bjarnson is a feather of a young boy whose father and brother look at him through eyes of disdain while his mother coddles him, further provoking the wrath of those around him. The one presence in his life that gives him the will to love and accept any physical turmoil anyone in this realm or the next could bestow upon him is Thorbrand Harekson. These two young men form a bond that transcends spiritual planes and allows Kol to endure the training necessary to harness his metaphysical powers and hone the skills necessary to communicate with the very Nordic gods whose existence is under attack.

The physical and emotional love that Kol and Thorbrand share is such that anyone finding out about their relationship would surely question Thor’s masculinity while making Kol even more of a pariah. Through a year of Kol’s training and a battle for the respect of Harek’s (Thorbrand’s father) kingdom, they find their relationship in constant contest with a society that measures the might of a man by the way he carries himself in battle as well as the way he handles himself in much more intimate affairs. Time and space will separate them, but what ultimately brings them back together – despite war, despite the staunch heteronormative traditions of the Nordic culture, and despite Kol’s spiritual destiny – is the undying connection the two have felt since they were children.

Steeped in the Norse mythology of Iceland, Erich’s story is as much a spiritual awakening as it is a warm embrace for young teens trying to come to grips with their sexuality. Though the story focuses on the relationship between a young boy and his only true friend and lover, Seidman goes beyond the “lonely outcast” trope and manages to give valor and maturity to a genre that can just as easily be likened to an after-school special.

What Erich accomplishes here is giving Kol the ability to defy his own preconceived set of limitations, literally giving his character wings and the strength to believe in his love with everything that he has. Despite the absence of paternal and fraternal support, Kol is still a young man who loves deeply and unwaveringly. Thor’s principles and staunch dedication to his family hold him back from fully accepting his affection for Kol; however, the thought of losing his true love is enough to throw him headlong into battle at the very notion that Kol may have been harmed.

Thus true love finds space in which to breathe even in the tightest circumstances. Kol and Thor’s relationship steps beyond the boundaries of society, sidestepping the crumbling of an ancient religion, and proving stronger than any war, body of water, or country that could separate them. Thus the brilliance of Seidman. It doesn’t attempt to dismantle societal norms. Rather it allows two people who truly love each other to carry on in spite of them.

You can buy the book at Amazon.

Part of the 2012 LGBT Blogathon