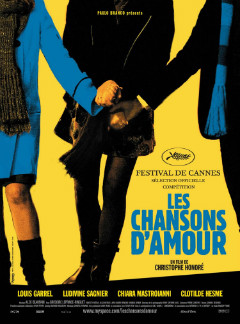 Les Chansons d’Amour is a romantic drama told through many songs. It tells the story of Ismael (Garrel), a lucky guy in a relationship with his long-time girlfriend Julie (Sagnier) and their lover Alice (Hesme). All of them are together, sleep together and are in a very free relationship, though Julie seems a little confronted by this arrangement.

While Julie tries to get Ismael to commit, with some incentive of her family, Alice gets Ismael between her and an ex, which prompts Ismael to meet Erwann (Leprince-Ringuet).

Christophe Honore creates this seemingly complex love story of one that wants to be with the other, and the other avoiding another. The songs work perfectly with the style of the film and the characters, starting with a certain cheekiness that morphs into solemness.

Louis Garrel is perfect — as he usually is on films — as Ismael, trying to avoid a serious relationship with Julie and covering himself with Alice. His jig is up when Julie’s sister, Jeanne (Mastroianni), starts questioning him and he is forced to evaluate why he never settled down with Julie.

Sagnier, Hesme and Mastroianni are all good and played well opposite Garrel, dividing their screen-time presence evenly. However, this is story goes to Leprince-Ringuet. The younger man who sets his eyes on Ismael, he is both annoying and charming, which works for the story — it’s like he is really trying to get us (the audience) to fall in love.

Les Chansons d’Amour is, all in all, a film that is exploring Ismael’s sexuality, which gives us a really wonderful scene closing the film with a perfect quote that could haunt you a long time after the film is over:

Aimez-moi moins, mais aimez-moi un longtemps.
// love me less, but love me for a longer time