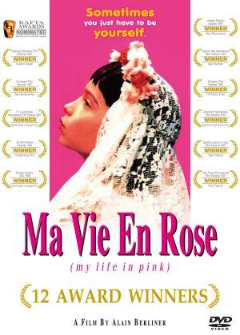 Ma Vie en Rose is the story of young Ludovic Fabre who at the early age of 7 has already developed a solid transgender identity, or in Ludovic’s exact words: “(… ) my X for a girl fell in the trash, and I got a Y instead. See? A scientific error!”

This isn’t about a boy who’s discovering his identity; it’s about a child who is convinced he was supposed to be born a girl. Not only that, he was positive that he would turn into a woman someday and did everything possible to achieve that, including trying to get a menstrual period. This narrative, of course, brings the ever controversial question: “Are people born with these tendencies or are they learned?”

The movie parts from the premise that Ludovic was born that way. He was raised no different than his siblings, but he was certainly different. They don’t bother to go into any deep, bullshitted explanation of why he was born that way. The director simply states, Ludovic is this way, that’s who he is. Unfortunately, for the rest of the neighborhood this isn’t acceptable behavior. Ludovic’s family tries their hardest to be comfortable with accepting their little boy as he was — everyone except his grandma. She’s enjoying the heck out of her quasi-grandaughter. The neighbors though… they think he’s either crazy or possessed.

The director also goes into the critical  difference between being transgender and being a homosexual. Most people tend to shove everything non-heterosexual into one massive category they eloquently call “gay,” but with Ma Vie en Rose there’s a clear example of a transgender male. Here’s a boy who identifies with everything that is socially accepted for his opposite gender, not necessarily a boy who likes boys.

In the end, Ludovic is convinced of who he is. He can’t understand why anybody else thinks it’s wrong that he wears dresses and wants to marry the neighbor’s son. This movie pushes us to think further beyond simple human behavior, it makes us break the restricting boundaries of standard psychological analysis; as we see when Ludovic is taken to a “specialist”. Ma Vie en Rose challenges its audience to accept that we’re not all born one and the same. Humans come in different colors, flavors and mind sets. Thus, certain social constructs are mere impediments, guised as moral teachings, towards a more unified, tolerant and understanding world.