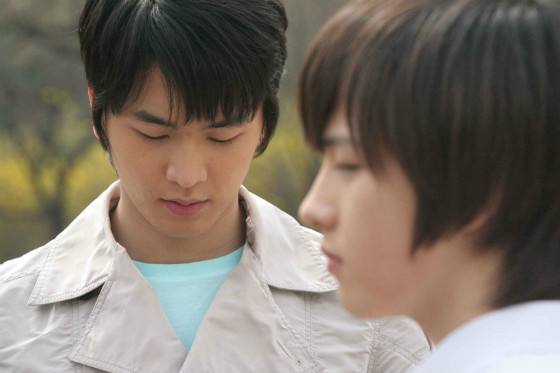 My first LGBT Korean short. There was  a lot of buzz on the internet about this short. It is now, that I’m writing a small review of it; that I understand why that was. Directed by Kwang-soo Jho Kim, one of the, if not the only, openly gay directors in Korea, Boy Meets Boy is another project in which Kim is trying to promote Korean LGBT themes.

The cute thing about this little short is that no dialog is used. The entire story is told through flashbacks and a funny little song. Boy Meets Boy depicts the story of when Min-soo (Hye-sung Kim) meets Seok-i (Hyun-jin Lee). Min-soo’s camera was stolen by Seok-i friends, and Seok-i has been looking for Min-soo to give it back. They meet in a bus as Min-soo drops a roll of film, and Seok-i picks it up. There’s clear tension, if not fear, as they look upon each other.

A thing that makes me wonder about the film is the fact that there is nothing that implies that Min-soo is gay. I mean, besides the ending that implies something, I don’t think it’s dead-on. The character of Min-soo looks like a cute little uke [1] and that Seok-i is a tall, muscular and strong seme [2]. But besides that, nothing.

I do like the notion that Seok-i has had a crush on Min-soo since way before, with the camera being stolen, he has then a clear motive to speak to him… but that could be my fangirl heart speaking. As a short, Boy Meets Boy works very well and I love how much the actors use their faces to describe their emotions.