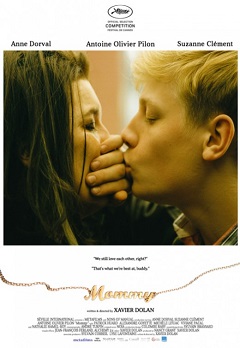 I haven’t seen any of Xavier Dolan’s films until now, so Mommy is my first taste of his directorial resumé. I had interest in watching this due to the great praises I’ve heard from many sources, but my interest in wanting to watch it exponentially grew not only with the constant comparisons with Boyhood, but also even hearing claims that Mommy is actually better than Richard Linklater’s film. How could you top a film that I considered at the time to be not only the best film of this current decade, but also an instant classic and a potential all-time great film?

The answer: Mommy edges out Boyhood, but we’ll get into that later.

“Skeptics will be proven wrong.”

That’s what she said.

Not Michael Scott from The Office, but Diane “Die” Després (Dorval), a broke Canadian widowed mother who is now forced to take full-custody of her violent son Steve (Pilon) because his actions at the detention center he was at has escalated to the point where Steve was pretty much one action away from going to prison. Raising Steve isn’t easy for Diane not only because of his behavior, but she also has economical issues and internal demons of her own to deal with. However, a mysterious neighbor named Kyra (Clément) somehow inserts herself into the lives of Steve and Die — it sounds kind of funny to refer to Steve’s mom that way, but that’s also her actual signature — and the three form a bonding unit that makes their lives easier to live respectively (especially for Diane) while everyone deals with their own demons.

Like I mentioned before, it’s inevitable to compare Mommy with Boyhood given the similar elements displayed on both films, which are masterpieces in their own ways.

There might be some other similarities that I may be missing from the top of my head right now, but some notable differences includes not knowing what Steve’s life was with his father before he passed away, Diane’s choices in men being different than Olivia Evans’ tastes as well as their level of education that explains how their respective children are the way they are, and we only get to see the Després family for a shorter time-span compared to the Evans family, whom were observed for 12 years.

The one thing that makes me put Mommy ahead of Boyhood is Steve. Even if Dolan’s film title doesn’t make a direct reference to him, he is the center of attention and Steve happens to be extremely more fascinating, fun, fucked up and entertaining to watch than Mason Evans Jr (whom also suffered drastic changes in his life yet his life was safer thanks to his mother) given that Steve appears to be both bipolar — oscillating between his obsessive love for his mother and his violent mood, which is hard to control — and perhaps suffering from Tourette’s syndrome because dude’s more profanity-ridden than say, the chef with Tourette’s from the Curb Your Enthusiam Season 3 finale. [1]

While Ellar Coltrane was good in his role in Boyhood, he got massively overshadowed by Ethan Hawke and Patricia Arquette. That’s not the case here with Antoine-Oliver Pilon, whose performance is not only worthy of an Academy Award nomination (and the same goes for Dorval and Clément), but he holds his own with his cast members and feels really organic to watch in every scene and despite being very unlikable, it’s hard not to feel bad for him when things take a turn for the worst in his life at certain moments.

The final scene from Mommy features an open ending that could go in two ways that I’m not sure if fans of Mommy would like to watch. Well, there has been conversations [2] about an actual Boyhood sequel (I’d even go for a trilogy as long as Linklater and the cast live long enough to be able to tell the story), so I’m all for either a sequel or prequel to Mommy. A few things here ended unanswered, so maybe a follow-up could solve that.

All in all, Mommy is a masterful film and time will tell if it remains as an instant classic or an all-time great film for me. I sincerely hope for the cast to get other directors’ attentions and make themselves into bigger stars while Dolan continues to pull off more films with other talents and maybe more established names. For starters, how about Jake Gyllenhaal? [3]