Me and This Year’s Award Season

Ever since 2003, I began printing The Academy’s Oscar nomination ballots to check the movies that I’d seen and began my predictions. My TOP predictions mark was that year when I got 23/24 guesses — beginner’s luck, since the shorts categories are so hard to predict without watching. 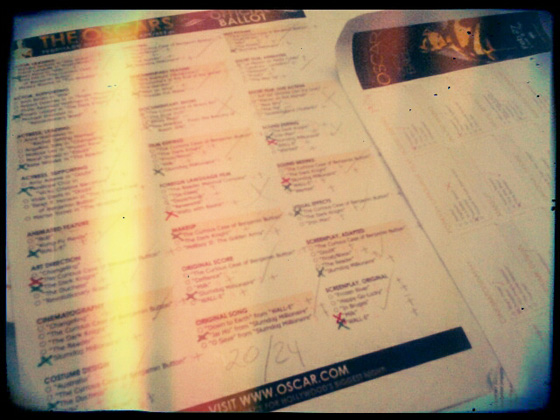 Since then, my regular guesses have been ambivalent 18s to 20s.

This year, however, I haven’t paid much attention to Award Season. Usually, today I would have prepped for a special day, watching the Independent Spirit Awards, pretending to be there (showering earlier and dining earlier than usual). I would be completely ecstatic about tomorrow for the Oscar, when I would also shower and dine earlier to not miss a beat of the broadcast.

This year I’ve missed all the awards broadcasts — Emmys… Golden Globes? Okay, I caught a bit of the Grammys and have heard about winners second-hand from other people — mainly, Marya ;) who keeps me up to date with these. And Juan who complains about who is winning… and who SHOULD be winning.

So what’s wrong this year?

I haven’t even printed my Oscar ballot this year! In reality, they made it a multiple-page ballot that just makes you lazy about printing it. I mean, who in their right mind would print a four page Oscar ballot? Who would waste four fine sheets of paper to print the nominees?

Small things that add up to the biggest snubs in film — Shame, We Need to Talk About Kevin, and Drive… I’m looking at you three specifically. Then there’s my generally lukewarm reception for most of the films this year.

I wonder if I will regain my love for Award Season next year.