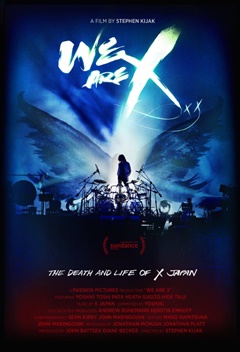 All bands have stories. Most are full of excitement and craziness. Some are filled with drama, drugs and sex. X Japan’s stories are far more somber and tragic. For many years fans and admirers of X Japan were left with nothing but rumors, vague explanations and speculation as to why the band suddenly disbanded in 1997 after 15 years of rocket-like success in Japan. Now, thanks to Stephen Kijak and We Are X, we have (almost) all the answers.

As Yoshiki explained to us during the Q&A session of the evening at SXSW, there were many offers and requests to do extensive interviews and documentaries over the years, but he was neither ready nor comfortable with the people who had approached him. But in 2014, when the band was reentering the music world stronger than ever and about to play Madison Square Garden, he was approached and the timing felt right.

We open the film on the preparations for the Madison Square Garden show, with Yoshiki working hard at the drums, suspended above the stage on a high platform… 20 minutes into his drum solo. Yep. 20 minutes. We’re not talking slow melodic drumming; this is X Japan drumming. Fast, metal, 350 beats per minute… fast. It’s no wonder one of the following scenes shows Yoshiki at the doctor being treated for multiple repetitive stress disorders, neck injuries, and often anemia. Despite all his struggles, Yoshiki keeps playing. He never gives up.

We start to head back, to the beginning of X Japan – where it all began in 1982, with young Toshi and Yoshiki seeking an outlet for their teenage angst. Much of the early days of X Japan are well documented and known by fans, so I won’t go into too much detail. Needless to say, Kijak puts good use to all that old footage of X Japan performing and behind the scenes. Even back then, Japan had a thing about following and filming their stars. The film dips into Yoshiki’s past, revealing his father committed suicide when Yoshiki was still a child. Leading him to be reckless with his own life. In order to channel that chaotic energy, his mom gave him a set of drums. And history, as they like to say, was made.

The charisma of the band they put together, along with a culture that was battling to come back from the dregs of war, created the perfect platform for X Japan to rise to fame. And rise they did. So high, they became the first Japanese act to attempt to release their music overseas. Much time and effort was put into the endeavor – only to have it fall apart spectacularly at the hands of Toshi, the band’s vocalist. The documentary reveals the actual reason for the band’s breakup, for the first time in years. Let’s just say, it won’t be what you expect.

The film itself is a magical weaving of historic footage, candid interviews with the band, and a few surprise guests (did someone say Gene Simmons?), but also follows the journey of the new, present-day reformation of X Japan. For someone that has been a fan of theirs for years and has seen the impact this band has had on not only Japanese music, but fans around the world, this film changed part of me. It takes twists and turns into the dark that you don’t expect and brings you out on the other side, joining the members of X Japan as they rise from the ashes. If you love music, Japanese culture, documentaries, or just good stories, We Are X is a must see.