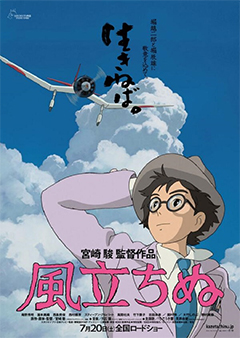 “Le vent se lève, il faut tenter de vivre,” Paul Valery once said, and it seems Hayao Miyazaki take the French poets phrase to heart. “The wind is rising, we must strive to live!” is the translation presented at the very start of The Wind Rises and an embracing of a simple but inspiring phrase such as this says a lot about the man. We’ve all been lucky enough to experience the beauty of Miyazaki’s career, many of us enjoying his tales of fantasy as we grew older, so it’s only fitting that his final film might be something very far from the tales of youth in fantastic situations we all know and love as we’ve matured.

Having said that, I must admit that The Wind Rises is not the impressive feat one would expect from Miyazaki’s supposed swan song. It has all the makings of a traditional Miyazaki work – from the fantastic nature of it all to a love story bound to make your heart flutter just enough – and yet, as his sole work grounded in reality over fantasy, it’s an entirely new territory. The link to reality comes in the form of Jiro Horikoshi (Anno), the chief engineer of multiple Japanese fighter airplane designs during World War II. As much as the film likes to trail off into the land of dreams, The Wind Rises is a biopic through and through, following Jiro through his youth up until the creation of the Mitsubishi A5M prototype. This sadly also means that it deals with the same problem that many a biopic covering great lengths of a person’s life does: aimlessness.

Miyazaki loves a good love story as much as the rest of us do, but giving it more gravitas than war in the midst of a picture about a war plane engineer seems more than a little misguided. The love between Jiro and his wife Naoko Satomi (Takimoto) unfolds in a fragmented manner – shoved between scenes where Horikoshi’s career and life are at stake – rather than naturally. And yet it’s still rather heart-warming watch these two lovebirds in good times and bad, even if their relationship isn’t all that well presented. Where The Wind Rises truly shines and surprises is in its quietest moments, Joe Hisaishi’s score sweeping one off their feet better than the wind ever could as the film plays out just like a silent one. The opening sequence – that of Jiro’s dreams of flight and disaster – is one of its finest, forcing the audience into an almost nostalgic sense of love for what good old 2D animation looks like. In reality, so much of the animation here is reminiscent of that which emerged in the eighties, to the point where Little Nemo of all things popped into my head during one of the dream sequences.

But just as he features the tender and beautiful, Miyazaki doesn’t entirely shy away from disaster either. Where something like Princess Mononoke had no qualms about diving straight into depicting a war-torn countryside, The Wind Rises keeps it in the shadows more often than not. This is at times a great thing, as disaster in dreams and ominous warnings from strangers like “Japan will blow up. Germany will blow up too” offer insight into the future. Yet by taking that route, one would expect more subtlety than multiple lines of dialogue dedicated to simply stating what a bad state Japan is in due to the war. In fact, his depiction of an earthquake’s harrowing impact is presented in a better fashion than that of the destruction war brings.

Those familiar with Hideaki Anno’s name – creator of the beloved Neon Genesis Evangelion – will find it strange to hear such a charming voice, but it fits his character perfectly. One of the high points here is voice acting, where a simple accent given to a character tells you exactly where their from, be they Japanese, German, Italian, and so forth. It’s almost worrisome to think of Disney dubbing this one without losing the genuine atmosphere that the original voice actors have given it, especially given the film’s settings, but this is a worry that comes with all foreign language animated features.

Through one of Jiro Horikoshi’s inspirations, famed Italian aircraft designer Giovanni Caproni, Miyazaki delivers a sad message. “Airplanes are beautiful dreams,” he states. “Cursed dreams waiting for the sky to swallow them up.” It’s an acknowledgment of war, yes, but more so an admittance that The Wind Rises is as cursed by its aspirations as it is blessed. But just as Horikoshi’s dream was realized by creating something he loved, it’s clear that Miyazaki’s own dream was as well.