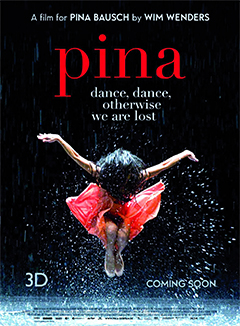 Often transcending the need for a traditional narrative, Wim Wenders is one of the few men who can truly capture the beauty of the world around us in his films. His latest test to the limits of cinema comes of the form of Pina, a 3-D documentary about dance.

One may hear the word documentary and instantly be filled with feelings of dread—but fear not. This is no ordinary documentary full of reenactments and narrations, but rather an exploration of the art of dance that is so rarely shown in film.

Pina is a film for and about Pina Bausch, one of the most influential choreographers of modern dance. Rather than digging through the life of Bausch, the film is a respectful homage which allows the dancer’s art to establish the person she was.

There is no real narrative to Pina, which consists of dances, the bare minimum of archival footage, and brief interviews with the performers and Bausch herself. It is clean and consistent in its showcase of the late artist’s work, and refuses to sacrifice any of the art that it features.

Wenders shows Bausch’s art piece by piece in the film, focusing heavily on the choreography and performance art that she created over the past few decades. Each piece is performed and recreated by dancers who worked closely with Bausch, letting loose their emotions in and out of the studio. The interviews involve these same dancers simply sitting silently in front of the camera as their tales of Bausch are told through poignant voice-overs.

While many directors would have limited themselves to performing inside of a theater, Wenders takes full advantage of the world around him. Certain sequences are performed indoors, in theaters, glass houses and studios that are dressed to fit the tone of the piece. Others are taken outside, allowing the performers to utilize and explore both nature and the industrial world that surrounds them.

The film shows that there is much more to the art of dance than many would ever realize. The dedication and discipline evident in these performances can be overwhelming, as these men and women strip themselves of everything but raw passion, and its exploration of gender stereotypes is something to be seen. Whether it involves placing a man in a floral dress or having a woman carry a man on her back, Bausch shows that her art, like her life, was anything but safe and ordinary.

Those who have never found a film that uses 3-D well will take pleasure in knowing that the use of it in Pina is not the slightest bit gratuitous. Wenders, who had been looking for a way to capture the beauty of dance for years, finally found the right cinematic tool to document Bausch’s work.

What we receive with the camerawork and the 3-D is a full display of textures and depth. The soil and sweat sticking to dancers’ bodies, the beads of water splashing as a woman twirls in the rain, or a lone dancer surrounded by an immense collection of machinery and construction—it is all designed to enhance the experience of the audience.

“Dance, dance, otherwise we are lost,” Bausch once said. Thanks to Wenders’ unforgettable film, many will begin to understand the beauty in dance and the freedom that it brings to those who are willing to embrace it.