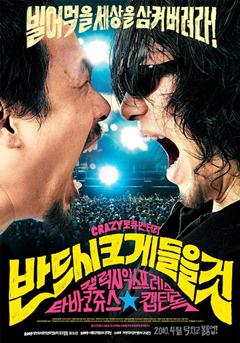 In essence Turn It Up To 11 is  a film about rock and roll, but it also takes on a life of its own as we get involved in the turmoil of making it big in Korea’s rock scene.  It shows how a small club in Incheon becomes home to several of the biggest acts in Korean rock and roll today. It features bands Tobacco Juice and Galaxy Express, both on separate journeys that take the bands through highs and lows. The film also boasts a hearty line-up of cameo appearances with artists like Apollo 18, KimChangWan Band, Yoon Do-Hyun, The Black Skirts, with tons and tons more hidden throughout the film.

The main story follows the bumbling “king of douche-bag’s” Tobacco Juice as they try to get their act together enough to record their first album. They suffer from eternal laziness, drunkenness and a lack of motivation. So it’s no wonder arguments and problems arise often with the band.

The flip side of the journey follows Galaxy Express’ leap to fame. They started out as a newcomer to indie label Ruby Salon, owned and managed by Kyu-Young Lee. At the time, they were one of the first artists under this label, but since have made such an impact on modern Korean rock that they’ve helped the label attract a number of great new acts. The film shows Galaxy Express’ sudden and explosive rise to popularity following their performance at the Pentaport Rock Festival.  It’s a great look at how they humbly react to their expansion and fame. At one point, they’re waiting to go on stage, but find themselves facing KimChangWan Band on stage and stand star struck and in awe. It shows that no matter how big Galaxy Express gets, they’re still able to idolize the people that helped bring rock to Korea.

In all, Turn It Up To 11 is a fun film that shows you an insider’s look at the Korean indie rock scene. You can feel the emotions of the bands as they struggle to find themselves. If you’re like me and you know tons of bands in the Korean market too, you’ll also get a few good squeals out of the deal because they just kind of pop up unexpectedly throughout the film. It’s  also a really candid film. Case in point, when someone asks Tobacco Juice’s lead vocalist, “Why did you originally start the band?” and he replies, “To fuck bitches.” Their honesty had me rolling on the floor with laughter sometimes. The fact that Seung-Hwa Baek is actually the drummer for Tobacco Juice gives you a little hint as to how true and intimate the film is. This is guaranteed to have you smiling if you are a rock fan, and if you don’t know any of the bands it’s also a great way to get to know them.

View it online, for free, legally at DramaFever