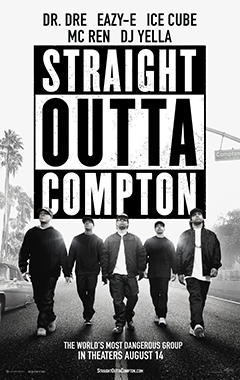 The story of N.W.A. is both as simple and chaotic as their debut album. Set to the backdrop of rampant police brutality, drugs, and ever-increasing unrest, these Niggaz With Attitudes were the product of a generation sick of being beaten and held to the concrete by the neck. As such any film depicting their creation, career, rise, and fall needed to be just as honest and raw as their music. What we get is a film that’s the culmination of years of preparation, conversation, and reminiscence.

Straight Outta Compton opens with Eric “Eazy-E” Wright (Mitchell) conducting a drug deal at his supplier’s house. In the middle of a deal about to go violently wrong, the police storm in with a battering ram, essentially demolishing the house in what appears to be a typical drug raid in the neighborhood, while Eazy himself escapes through a window. As soon as he leaps across the rooftops to evade arrest, the screen instantly proclaims its presence, the words “Straight Outta Compton” emblazoned in a mockery of the familiar Parental Advisory warning sticker.

From there we’re introduced to each of the five members of this group in their elements: Andre “Dr. Dre” Young (Hawkins) immersed in the music of Gil Scott Heron; O’Shea “Ice Cube” Jackson (Jackson Jr.) riding the bus to school through a Crip-infested neighborhood, writing lyrics. The stories of Kim “Arabian Prince” Nazel, Antoine “DJ Yella” Carraby, Tracy “The D.O.C.” Curry, and Lorenzo “MC Ren” Patterson were portrayed as being tightly woven into the creation of N.W.A., with unfortunately only vague details about their origins; however, it’s made very obvious how important their contributions to the group actually were.

Straight Outta Compton is less a detailed portrayal of each member’s origins and much that went on around them—most glaringly absent, the creation and influence of all-female rap group J. J. Fad. It’s told mostly in flashes of important moments, as if Dre and Cube are looking at a photo album and telling the stories behind each picture from memory. While the story is largely incomplete, at just over two and a half hours, the biopic was obviously created with great care and attention to the moments that meant the most to Dre and Cube. Both acted as executive producers on the film, thus the tone of the story was always raw and honest, even as it seemed to gloze over details in lieu of painting an overall picture.

Interwoven between the moments of creation, excess, and inter-group turmoil, there are flashes of just what it was like for Black youth in the ’90s. Predominantly Black neighborhoods were under siege. And while some might think the images of police brutality and misconduct were sensationalized, all one has to do is turn on the news. I’d say a young man getting shot in the face in his car by a man sworn to “serve and protect” is pretty damn sensational.

From the slant of the narrative, it’s obvious the focus was always going to be on the group’s most famous members. Sure, the details of their lives are drastically overshadowed by the temper of the times; however, the film captured the meteoric success and the dramatic tumult of N.W.A.’s career without losing any of the emotional integrity.

Regardless of intent, Straight Outta Compton wouldn’t have been what it is without its stellar cast. One can do worse than having his own son portray him in a film about his career. It’s obvious O’Shea Jackson, Jr. was going to be able to pull off playing his own father. However, Corey Hawkins and Jason Mitchell were profound as Dr. Dre and Eazy E, respectively. Paul Giamitti as Eazy E’s business partner Jerry Heller played his role with great emotion and depth—a scene in which Eazy confronts Jerry about his faulty bookkeeping comes to mind as being particularly uncomfortable to watch because it lacked any sense of “acting” and was instead a scene of great desperation.

The film is obviously meant to evoke an emotional reaction from audiences. From the music to actual news reels of the beating of Rodney King, the trial, and the resulting LA Riots, it’s certainly not an easy film to sit through, particularly for white audiences who may have felt ill at ease surrounded by their Black peers who not only remember the time, but still feel a level of hostility because of the lack of progress.

However, I believe Straight Outta Compton is mostly Dr. Dre and Ice Cube’s love note to Eazy E. Honestly, he wasn’t much of a rapper, but the man never professed to be. What he lacked in overall skill as an MC, he more than compensated for with vision, ambition, and an ability to project all the intensity of his situation. As with his most recent release, the aptly titled Compton, and the subsequent releases of his career after leaving Death Row Records, Dr. Dre continues to pay homage to his roots and respect to his close friend and creative partner.

Straight Outta Compton is easily one of the most important films of the last five years. Personal and incredibly honest—if not a bit self-aggrandizing—this film touched me in a way that I’m still reeling from weeks after having seen it. Really all I can do is thank N.W.A. for their fearlessness and raw honesty, and Dre and Cube for telling their story.