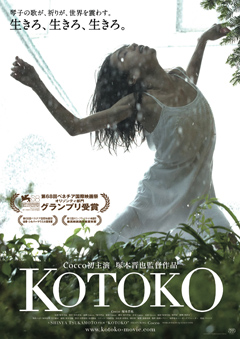 Someone sold Kotoko (stylized as KOTOKO) as a horror movie to me, so I was prepared to be scared sh!tless because Japanese (Asian) horror is spooky and often full of gore. However, I surprised myself with it because Kotoko is mostly a drama with a section infused with gory drama and even a bit of dark humor romance.

KOTOKO is the story of Kotoko (Cocco) a deeply — and I really mean DEEPLY — disturbed single mother of a very young baby. She has a problem that she refers to as “double vision”, seeing a reflection of a “crazier” version of a person she sees. When she’s out in the park having a stroll with her baby and someone approaches her, she’d immediately see another version of that person trying to harm her. As a result, she’s moved city to city until she settled on her current apartment, which she has setup in a way she won’t need to go out and meet other people.

It appears the stress of living in the city and having a small child in her care, as well as the stress of getting found out by social services, is too much for Kotoko to endure. Despite all of that, she finds solace in family life in Okinawa — Kotoko is really at peace when she’s in Okinawa, steps away from the ocean and away from the troubles that torment her in the city.

One day she meets Seitaro Tanaka (Tsukamoto). He falls madly in love with her, and Kotoko’s demons manifest themselves against him to free her. I’m not talking literally about demons, but what happens between Kotoko and Tanaka is messed up — though, I must admit that the second fork took me by surprise and totally got me to laugh awkwardly. The strongest point in KOTOKO, however, is its acting. Singer Cocco — making her on-screen debut — takes her own knowledge about self-harm and delivers some powerful high tension moments as easily as she delivers the emotional punches, especially when she does what she does best: singing. And she was in charge of it too!

What I’m unsure of is the mixing of genres. Is it wrong I laughed? When Tanaka was enamoring Kotoko and those scenes of violence played like illusions, I did think that was all in Kotoko’s head. However, as their romance intensifies and the violence escalates everything begins to be a little too surreal. Once that is all over and KOTOKO begins being a drama once again, it brought its best elements. The music and the atmosphere of the film reminded me at times of Shunji Iwai’s All About Lily Chou Chou, as both films deal with the emotional destruction of their characters in an almost poetic way. Though Kotoko’s fate is ultimately disheartening, the ending seems to hint at a bit of what seems like freedom.