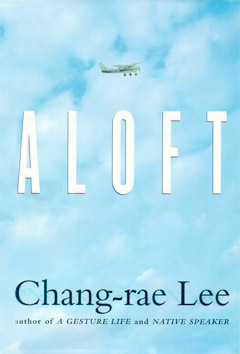 One thing you have to know about author Chang-rae Lee: he teaches creative writing at Princeton University. Another factoid that you’ll want to tell your mother: he has won more than one glittering literary award, and was a nominated finalist for the Pulitzer Prize for Fiction in 2011.

But don’t get the wrong idea; if you have a mental image of Lee as a disinterested professor spouting off old school cool witticisms in an intellectually sterile environment full of overstuffed armchairs and more stuffed people, then you’d be wrong.

In his 2004 novel, Aloft, Lee’s prose stretches over you like a supine sunny summer day – the kind that stays warm long into the night and curls up around your ankles like a dozing cat. His descriptions are long, pulled saltwater taffy that you can chew into some semblance of meaning.

In short, this guy’s prose is so lyrical, he could build grocery shopping up as the epicenter of a crisis in singularity, transform clipping toenails into an existential quandary, and make sorting the recycling a prophecy of something tragic in the Greek sense of the word. More than that, Lee’s writing is genuine.

Despite all this purportedly highfalutin’ language, Lee really is that guy. That’s what he writes about. The anti-hero of Aloft is a regular Joe, an emotionally unavailable Italian-American father, Jerry Battle, who has drifted along ever since the death of his dearly beloved, long departed wife. His children are estranged, his father is in a home, and the woman he adores despises him in a desperate way that only happens when love has been left to curdle.

As Jerry continues to drift and ponder and eventually, slowly, gently come back to Earth, the readers drift along with him, floating belly-up as though in a dream, feeling the heartbreak of this dysfunctional family, and then marveling at how beautiful it can be when something broken is gradually fixed.

The ending of Aloft is powerfully satisfying, an impressionistic reprisal of all the themes and images and beloved characters from the last 300-some pages. Once you finish it, don’t be surprised if you are left still chasing the flavor of Lee’s personal brand of hopeful optimism. Go ahead; roll each sentence around your mouth like a fine, rich, full-bodied wine.