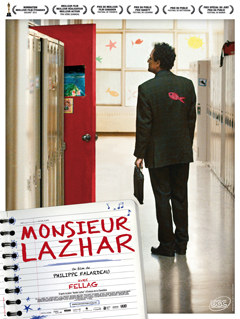 Who here loves To Sir with Love? That’s kind of how Monsieur Lazhar is but, at the same time, quite different.

I have to admit that I’m not really familiar with French-Canadian cinema, even though French-Canada is most famous for poutine [1]… and its cinema — I’m famous for skipping a showing of Bon Cop, Bad Cop, and I still haven’t watched The Barbarian Invasions (Les Invasions Barbares), yet despite winning Best Foreign Film at the 2004 Academy Awards (and actually living in Canada those years). I did, however, spot Brigitte Poupart (as Claire) because I’m a Catherine fan — go, figure.

Monsieur Lazhar is the story of a classroom, specifically two children — Alice (Nélisse) and Simon (Néron). Both kids are having their regular morning meeting in the schoolyard, when Simon goes over to his classroom because he’s in charge of the milk that day, only to encounter the hanging body of his room teacher. The school, of course, is set into quite the frenzy, and children are tip-toeing around the issue as adults try to cover up the grim situation.

In the meantime, Ms. Vaillancourt (Proulx) is in search of a substitute teacher, when Bachir Lazhar (Fellag) shows up… “almost by chance,” stating that he’s a university professor from Algeria that has been in Canada for years, and that he’d be a suited replacement while they do any formal documentation. Mr. Lazhar isn’t your typical teacher, he’s serious, strict… and has a story of his own, that the children will be able to help him with as they all deal with the loss in their lives.

I have no idea why I decided to watch Monsieur Lazhar, maybe because I confused the title with France’s 2003 film Monsieur Ibrahim. In any case, I stuck around to watch the whole film and greatly enjoyed it. Though most of the film is set at the school, I found myself more and more interested in this would-be teacher and his students, maybe even much more than I did with Entre les Murs. In here, writer director Falardeau paints a general view of French-Canadian idiosyncrasy, about their views on the role of teachers in the education of their children or how the bureaucracy of the refugee system works, just as we learn about how to deal with loss, learning to forgive ourselves and move on with the memory of our loved ones, with a perfect monologue titled  The Tree and the Chrysalis.

Mohamed Fellag delivers a nuanced performance as teacher Lazhar, giving the movie a backbone. However, it is the child actors who shine the most. Sophie Nélisse delivers a charismatic and honest performance against both Fellag and Émilien Néron, who in turn has the most dramatic scene in the whole movie, tear-shedding like he really had been emotionally broken since the death of his teacher.

The end of Monsieur Lazhar is heartwarming in a very bittersweet way, showing us how as adults things never seem to be gray, while children are able to forget animosity and move on. Adults seem to carry their baggage everywhere they go.