U Me aur Hum 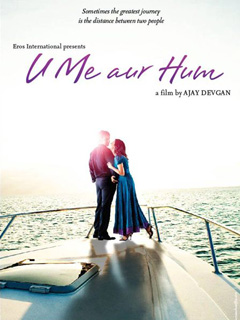 This review (next to some others) has been a long time coming. It’s just amazing how a few couple of more films (a little bit of trivia and some other knowledge) can do to one’s perspective. There really isn’t anything particularly rage-inducing in Ajay Devgn’s U Me aur Hum– after all, he did bring back his real-life wife, Kajol, back on screen for a starring role despite having spent most of that decade off of it. Not like I felt it, but it makes it easier to catch up with filmographies when a whole decade worth of films is only represented by a couple of starring roles and scattered uncredited cameos. And it’s in fact a less sleazy move than trying to cast the both of them in your movie about extra-marital affairs. I’m side-eyeing you so much, Karan Johar.

In here Devgn takes the role off and on camera, playing Dr. Ajay Mehra who is at a cafeteria with his son Aman (Aditya Rajput), who is trying to strike up conversation with a woman. Seeing his son fail at courting a lady, Ajay makes a bet with his son that he’d be able to pick up anyone in the room- enter: Piya (Kajol). It’s a bit of a dick move, but I’m slightly more distracted by the aging makeup. Anyway, Piya is wary, she doesn’t like Ajay right off the bat either, but he tells her the tale about love nonetheless — queue story within a story [1][2][3] about a man — very much like him — and a woman that’s very much like her.

I’m uncertain on whether U Me aur Hum wants you to know this, but Ajay is telling Piya of how they met, which lends itself to all sorts of comparisons to the people’s favorite — yes! Guilty as charged! — The Notebook. Though I’m inclined to think that the adaptation to the cheese of Nicholas Sparks’ book is centered on the suffering of not being able to be together during their young age, U Me aur Hum follows Ajay as he tries to enamor Piya during a cruise trip that she’s working at. Their struggle to be together isn’t as melodramatic, but merely filled with fluff of awkward “white people type” of salsa-dancing that later borrows the device of a very early on-set of Alzheimer for dramatic purposes.

Does it work? Maybe the setup is too long. The biggest hurdle Ajay needs to overcome is that he’s invaded Piya’s privacy to be able to get closer to her, but that’s hardly worth more than one hour of development. I think I would’ve been more affected by their problems, if I had spent less time seeing him making her fall in love with him, and instead having them develop their bond to feel the strain the disease creates.

The acting here is average, but nothing to frown upon. While the weakest part is the writing — specifically focus on the story between Ajay and Piya, instead of their friends’ problems; its strongest element was when it presented the conflict of leaving family members with Alzheimer in institutions or whether to care for them at home. That is the struggle Ajay goes through, when he literally looks down on a client who would “dump” her husband in the hands of others, but then is met with the same situation. U Me aur Hum never tells you which one is right or wrong, but it paints the picture as quite gray, despite the happy ending.

Only recommended to hardcore Kajol fans.