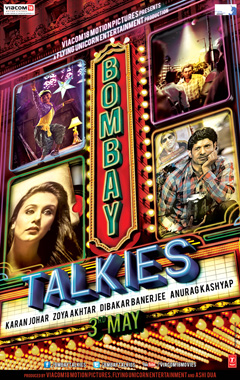 This year Indian cinema celebrated 100 years of history, and I’m lucky enough to be experiencing it all and having the time of my life. In Bombay Talkies, four filmmakers got together to tell their short stories of Indian cinema and how it has impacted the lives of people.

In Johar’s short, a woman (Mukerji) opens her eyes at her husband’s (Hooda) closeted life when her gay assistant (Saleem) begins sharing his love for Indian classic songs. Following that, Banerjee’s story follows a failed actor and father (Siddiqui) who gets a small non-talking part in Ranbir Kapoor’s latest flick, and in Zoya Akhtar’s story we follow a young boy (Jain) who wants to be a dancer like Katrina Kaif when he grows up. Finally, Anurag Kashyap follows a man (Singh) who’s dying father asks him to get superstar Amitabh Bachchan to dip his finger in his Murabba [1].

Karan Johar isn’t necessarily the king of subtlety, but his implementation of Indian cinema within his story is the most effective of all. I didn’t agree with aspects of his LGBT characters — after all, Mukerji’s character seems to be the heroine in his story — but those unlikable aspects made the characters more real, especially with Randeep Hooda as the closeted homophobe, who had for so many years tormented Mukerji’s suffering wife despite her no BS exterior. Besides his use of music, I enjoyed the detail of the rainbow-colored gradient of saris that happened to be in the closet when the married couple are getting ready for their day’s work, as well as the final scene when Rani is taking her makeup off.

While I do consider that Nawazuddin Siddiqui generally can steal scenes out of big stars whenever they share the screen with him, the anthology’s biggest spotlight-robber turns out to be the young Naman Jain. I found him endearing with his failed attempts at sports, I feared for him, and I had a blast watching him dance to his heart’s content. I also burst out laughing when Katrina Kaif showed up as a fidget of imagination with Tinkerbell wings and all. I don’t know which one of the shorts is the most blunt with its inclusion of Indian cinema, but that one moment could easily take the cake.

As for the last short, I found it a bit unnerving because the concept of worshiping a movie star disturbs me — now more than ever — and having to see Vineet Kumar Singh suffering just to get a glimpse of Bachchan biting on his Murabba had me cringing, I liked the story’s wrap-up, though. I suppose there are people like that, and that is the whole point of Bombay Talkies (besides the cinema aspect): honor its art, the people involved with it, which includes all its superstars. How else can we explain the title number [clip], which in the film included a segment of classic Indian films edited a la U2’s Window in the Skies [MV] way before Aamir Khan’s face ever shows up. I liked the number a lot within the context in which it appeared. It somewhat reminded me of that ever famous kisses compilation from Cinema Paradiso.

You can stream Bombay Talkies with English subtitles on EROSNOW.

Here’s a playlist of all the songs that feature on the Apna Bombay Talkies number.