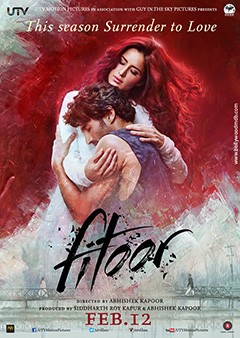 I finally got the chance to watch Abhishek Kapoor’s desi adaptation of Dicken’s Great Expectations which, to be honest, I had lowered my expectations for– no pun intended. Titled Fitoor in reference to the the overwhelming tipping point of insanity and/or obsession [1] of Pip towards the Ice Queen, Stella, who get entangled due to the machinations of the insane brokenhearted Miss Havisham.

Instead of being credited as “inspired by Great Expectations,” the movie would’ve worked wonders if they had gone for “inspired in Miss Havisham,” though Kapoor’s Begum Hazrat (Tabu) bears little resemblance to the source material by not having her lost her mind right off the bat, her heartbreak is apparent through her Machiavellian heart. It’s beautiful, it’s tragic, it’s the most memorable part of this beautifully shot emo hot mess that is the set up of the gullible Noor (Kapoor) with the distant Firdaus (Kaif).

The story begins, of course, when both Noor (Abrar) and Firdaus (Sharma) are children in politically turbulent Kashmir [1], which isn’t pivotal, but certainly gives Fitoor its most visually stunning scenes in charge of cinematographer Anay Goswami with those red, orange and golden Chinar leaves. It’s less impressive as we move to Delhi’s and London’s posh art collecting scenes to hang out with the who’s who; which are, in fact, the ones that relate the most to the build-up of the lovers. Roy Kapoor had already played a mopy emo lover boy in his breakthrough role in the hit Aashiqui 2; in preparation for Fitoor he toned up and slimmed down [1], while the production had a hair scandal reporting that Kaif’s (apparently “key”) red hair was costing 55 lakh INR (a bit more than $800k USD at current exchange rate) [1]. If they had only spent that amount in acting classes, because I honestly burst out laughing at one point during their romancing.

Where the film shines the best is when we go back to explore Begum Hazrat (Rao Hydari) in her younger days once again shot against the gorgeous Kashmiri setting, and that amazing set they built [1]. During the announcement that Rao Hydari would be playing Tabu’s younger version, I was skeptical… but I was sold on it. If there’s anyone breaking out from this is her, though I haven’t seen Wazir yet. Whereas in other adaptations Miss Havisham’s backstory is just told, in here we get to experience it– a story of swindling, betrayal (from both her lover and father), and that lost love that you just can’t let go. It gets to its greatest moment when Tabu’s Begum finally breaks down and becomes the Miss Havisham that we all know.

I loved it. Extra half for that.