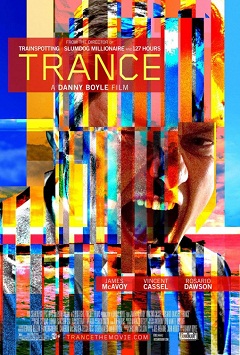 The poster for Danny Boyle’s latest film pretty much sums up the intended viewing experience of Trance because it’s a trippy film to watch thanks to its Inception-like gimmick and multiple twists throughout its running time.

Trance follows Simon (McAvoy), who works at an auction house and explains the audience how his job is done while he’s getting ready to auction a painting worth US $25M. An attempt to steal the painting ensues and Simon, against his own words, protects the painting and plays the hero… only to get whacked in the head and suffer amnesia.

A few minutes later, it turns out that Simon isn’t who he really said he was during the film’s earlier minutes. However, he can’t remember a single thing regarding the events that happened during the auction thanks to the blow to the head.

After talking to his buddy Frank (Cassel), they decide to enlist Elizabeth Lamb (Dawson), an hypnotherapist who tries to make Simon remember what he did that day with the painting and where did he left it. What started off as a simple quest to recover a pricey original painting ends up turning into something bigger and more confusing for all parties involved.

Danny Boyle’s Trance is part film noir, part thriller and part heist film, which showcases a lot of multiple plot twists that goes way beyond its simple beginnings (art theft gone bad) along with visually stylish yet nightmare-ish sequences through the hypnotherapy scenes which feels similar to Inception‘s “dream within a dream” trick. I’ll admit that Trance isn’t as cohesive as Inception was regarding the gimmick use since it blurs the lines between fantasy and reality way too much for its own good. However, in the hands of Danny Boyle, the screenwriters and the main cast, Trance becomes something truly engaging to watch and marvel at.

The cast is really good. Vincent Cassel’s performance as Frank is good, but the stronger performances came from James McAvoy and Rosario Dawson, who had meatier characters and prevented the film from falling apart with its multiple twists. While McAvoy handled greatly the many sides and emotions Simon had as he morphed from Average Joe into something else later on, it’s Rosario Dawson (in the best performance of her career so far) who gradually steals the show as her character keeps everyone in control (literally) and serves as a pillar to sustain everything that gets complicated in the film.

Trance isn’t the best film of Boyle’s career by any means — it’s very tough to top the likes of Trainspotting and 28 Days Later. But it’s a pretty great film with great direction and performances that doesn’t become boring at all despite its many twists which gets heavier and a bit out of control near the end of the film. It’s also proof of why Danny Boyle is still a great director: put Trance on someone else’s hands and very few could make it work like he did.