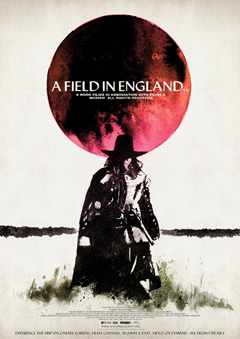 English filmmaker Ben Wheatley confirms, once and for all, his immense versatility and creative quality with the puzzling and odd A Field in England, a very low-budget film with no female characters. After the triumphant Sightseers, one of the brightest dark comedies recently released, he now turns toward a totally different approach.

This time a sort of avant-garde experimentalism was used featuring grotesquely appealing cinematography with foggy and rural landscapes in black-and-white; a more significant usage of sound, whether isolated or in the form of troubadour songs that helped create the ambiance; a rough humor that matches perfectly with the harrowing story depicted; and a wildly violent side that not even his bleak Kill List can come close.

The story, once again co-written with Amy Jump, is carried in a baffling way. During the 17th century English Civil War, a literate alchemist called Whitehead (Shearsmith) joins a group of deserters composed by Cutler (Pope), Jacob (Ferdinando), and Friend (Glover) — all compelled to find a mysterious treasure under the orders of tyrannical Irishman O’Neill (Smiley). Without anything to eat in the fields except hallucinogenic mushrooms, the characters set off on a trip into obscurity, threatening one another while trying to understand the evil forces that surround them.

The aggressiveness depicted in some scenes was overwhelming, and we realize without surprise that Whitehead forcibly would have to change from coward to punisher. Only Friend seemed to have gained some sympathy from his mates by adopting a more accessory attitude. The hypnotic A Field in England gets into your senses with all the screams, madness, and visceral behaviors of its characters, being a violent art-house film with no limits for the mind. Its audacity proves Wheatley as a consistent director who showed not to be afraid of taking bold and risky moves.

We are before a unique experience that combines prayers, threats, diseases, hostility, cries and laughs, hallucinations, savagery, and many other factors to form an explosive cocktail that gets closer to the insanity than to reality. Together with Shane Carruth’s Upstream Color, it’s become one of the most satisfying mental odysseys of 2013 so far.

Lovers of innovative cinema along with a considerable niche of art-house supporters will find something in this film that stands out from the standard patterns of making cinema. However, some may find its narrative detachment and harsh posture too challenging to be likable.