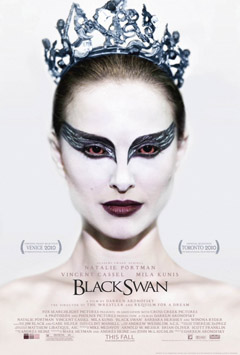 Black Swan is the story of Nina Sayers (Portman), newly elevated to the role of prima ballerina in a New York City ballet company. They are starting their new season with a production of Swan Lake with Nina in the lead. While she can nail the elegance required for the role in her sleep, she’s having trouble finding the passion.

The film is all about how director Thomas (Vincent Cassel) and fellow ballerina Lily (Mila Kunis) try to coax that passion out of her before the curtain goes up on opening night… and whether or not Nina can tap into said passion without losing her mind.

I was happily able to come into Black Swan blind — I even avoided the trailer — so the framework of the film caught me very much off guard. Aronofsky has created a film that is just as much Requiem for a Dream as it is The Wrestler. The result is so startlingly visceral and unsettling, that it’s bound to divide audiences when it opens later this fall.

It is so much more than just “a ballet movie”. It’s a dark journey down the river, with themes of obsession, determination, sexuality, and the price of fame. It’s Portman’s most complicated part ever, and one that she nails at every turn. Cassel commands as the controlling and demanding director, and Mila Kunis shows us that she’s capable of more than just animated voices and rom-com’s.

But the true star of the film is Aronofsky and the seemingly bottomless bag of tricks he has at the ready. I don’t dare reveal them here… mostly because the element of surprise was what made them so powerful for me. I will say this though: I’d love to know how he employed so many mirrors in this film and avoided all camera reflections.

Black Swan is bound to be one of the most talked about films of the year. For my money, before I talk about it any more, I believe I need to see it one more time.