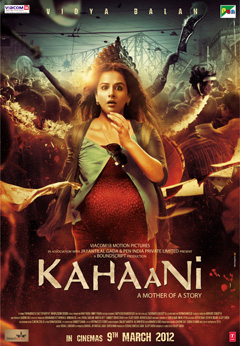 Scriptwriters and filmmakers always tell you (at least in film school) that your story, whatever it may be about, needs to be solved with the elements you present in the first fifteen minutes of the story. Otherwise, the audience may feel cheated.

Kahaani, which translates to ‘story’ apparently, follows a pregnant woman named Vidya Bagchi (Balan) that arrives in Calcutta in search of her husband, Arnab Bagchi (Sengupta), who’s gone missing without a trace. Upon reading such simple plot, one would wonder what could be so extraordinary about the film to warrant the positive response Kahaani got during its run in theaters, following award season in India which included a win for Best Screenplay at the National Film Awards and a Best Actress nomination for Balas at the Asia-Pacific Film Festival. (which went to Kwai Lun Mei for Gf*Bf ;P~ )

The film is an apt drama thriller from Ghosh, who mixes in some cultural flavor of the city of Calcutta as he tells us the going-ons of the power elite trying to uncover the culprit of a terrorist attack. Kahaani never stops being a drama as we see Vidya struggling with the loss of her husband and having nervous breakdowns when the situation seems to get out of hand for her, then she turns it around sassing and charming (if a thriller could be that) her way in and out of trouble, especially during her encounters with deputy Khan, played with dick-ish ease by Siddiqui (he’s excellent in Talaash).

Kahaani has little to envy from Hollywood thrillers technically, except for a scene of massive death at the beginning, the film uses it’s quite minuscule budget (of $1.2M USD) efficiently with a guerrilla-style filmmaking that throws us into the life of this woman thrown into this unknown city. Her journey is compelling even after a second watch, and never loses its pace despite the lack of “Hollywood” fights and chase sequences that don’t require super athletic agents or ripped contract killers that seem to have trained with the best of The Matrix fighting choreographers or trained for Olympic marathons, so swiftly edited with cuts to dizzy us and mask all the behind the scene magic.

Kahaani is real, but what makes it great? It’s the mother of all twists.

I can’t remember when was the last time I’ve felt compelled to watch a film again (so soon) to see if I can spot a clue of it coming. During my second viewing, I was only able to find one indirect clue, which makes me doubt whether or not I should feel cheated on the outcome. Then again, all of these characters’ preconception on pregnant women may be the point of the story. I, too, may have had some.