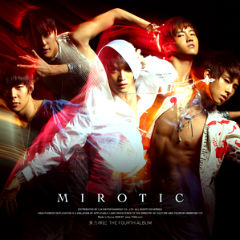 Finally, the culmination of over five years (even longer for some of them) of hard work and dedication led the boys of Dong Bang Shinki to becoming members of one of the most influential pop groups in the past 15 years. Who would’ve thought five kids from completely different backgrounds would come together and create what’s been dubbed the best-selling Kpop album of all time (arguably the best Kpop album period)? After an 18-month absence from their Korean fans, DBSK came back with something akin to a sonic boom and with it became legends of the industry.

Mirotic was more than anyone could’ve imagined, and it certainly put audiences on notice that DBSK wasn’t just a group of bright-eyed boys with pretty voices. They were men with honest to goodness sex appeal and a glowing presence that outshone almost every other group that existed at the time. Even the album title itself (a construct of their mercurial lead singer, Kim Jaejoong, the word is a combination of the word “miro”, meaning maze, and “erotic”) is a message: we are sexual grown men who are unafraid to show it. The track was rendered so suggestive, it was slapped with a 19+ sticker for a time.

Mirotic goes hard from the title track. The music is raucous, heavy, and it strays from the “traditional” Kpop formula — using a “reverse beat” as the bottom line. The follow-up single Wrong Number is just as electric, bringing solid R&B to the group’s core sound. It’s a pattern of hard-hitting pop that makes up the majority of the album, with tracks Hey! (Don’t Bring Me Down) and Are You A Good Girl. The more beat-focused, sultry compositions extend to the ballads, taking their solid vocal harmonization and grounding it with a powerfully laid R&B foundation (Picture of You, Paradise).

Following the response of their previous effort, the members showed they were ready to start contributing their own material, this time offering even more emotive compositions. Kim Jusnu penned soulful Picture of You; youngest member Shim Changmin tried his hand at translation and gave us the Korean version of one of the group’s most evocative songs to date, Love In The Ice; and Park Yuchun followed his work on T with another song that was just as heavy-laden with emotion as Kiss Shita Mama, Sayonara (track Love, Bye Love). If ever an album was used as a vehicle to explore the maturity of its artists, Mirotic is that album.

Though there are moments on Mirotic that are strictly bubblegum (no surprise, considering the audience), even those sprinkles of sugary pop aren’t enough to detract from its overall impressive quality. Let’s be frank. This album is a paragon, a roadmap which all Kpop albums followed in order to understand what truly successful pop music in Asia is all about. It’s the prototype for every rookie group looking for the formula of precision, sensuality, and pure vocal that makes up the perfect Kpop album. More than anything else, Mirotic proved to all of Asia that hallyu had not only its greatest representation of the genre, but its latest and probably most spectacular legends: the aptly titled Rising Gods of the East.

You can listen to Mirotic in Xiami. You can purchase the album at DVD Heaven, Synarra, and YesAsia.