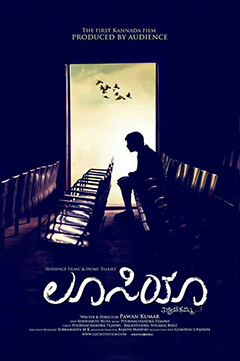 I’m working on a Best Of 2013 Films [1, YES… still working on one] list, and I’m trying to complete the most hyped and acclaimed titles that I haven’t gotten the chance to watch yet. One of those titles was Lucia, which attracted me because of its unusual (pronounceable) Indian title and its gorgeous simple poster, on top of being the first Indian film to be successfully crowdfunded, released in theaters in a commercially successful run and made available online. The film also managed to get writer-director Pawan Kumar the Best Director award at the Filmfare Awards South, as well as a Tamil, Telugu… and a big Hindi deal for remake rights [1]. I don’t know about remakes, but hey! Good for Kumar! My expectations were pretty big, would the film be able to meet them?

The Kannada film industry is relatively small (compared to Bollywood, Tollywood and Kollywood), so I’ve only seen one other film (Edegarike, with Atul Kulkarni) because they’re hard to find… especially with English subtitles, let alone in any other alternative subtitles, on this side of the world, so Lucia is being heralded as a big change in how the industry works.

Pawan Kumar’s story begins with a common man’s philosophizing: “Are you a creature of illusion? Or is illusion your creation? Are you a part of the body? Or is the body a part of you? Is space within the house? Or the house within space?” as he continues his rambles on reality versus perception, we begin to question the mystery in the non-linear life of Nikki (Neenasam), a comatose man who has become a news hot topic as the nation discuses the morality of euthanasia. While detectives are on his case, we learn of his life as an usher at a tiny local theater, whose owner Shankranna (Kumar) refuses to exhibit anything other than Kannada films struggling to make ends meet, trapping Nikki on a dead-end job that’s a labor of passion until he lays his eyes on the cutie Shwetha (Hariharan).

Unable to sleep at night, his friends get him a new sleeping pill, known as Lucia, that will blur the line of dreams and reality.

The setup of the story is intriguing, even if a little confusing presenting the three different timelines and only creating a distinct black and white direction for one of the storylines… which is the weakest in terms of cinematography because digital black and white usually ends up being flat in contrast to something like Ida, for example. It’s in those transitions where it drags on a bit -despite the more filmi musical numbers- while introducing the romantic conflict with Shwetha… even if the pay-off (is it a pay-off if it’s in reverse?) is quite good. There should be an emotional connection there somewhere, but it didn’t feel like that, maybe because it was a non-linear narrative focused on the mystery.

I definitely enjoyed it more than this year’s big Telugu film 1: Nenokkadine, which shares that whole “what you’re seeing may not be what it is, unless we tell you it is” thing going on. Then again, I’ve been told this relationship I have going on with Telugu films is not meant to be… so who am I to judge. One thing is certain, I hope more Indian regional films get released (closer to their release date) on VOD in the future!

You can watch Lucia with English subtitles directly on Vimeo on Demand, or the Distrify Player on the Lucia Official Website or the HomeTalkies Website.