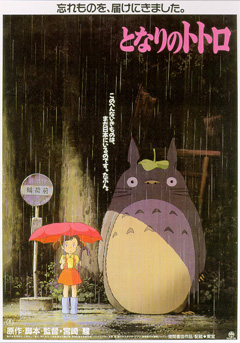 This has been a long-time-coming review, so what better way to celebrate 25 years of Miyazaki’s children’s classic, My Neighbor Totoro, than to re-watch and review?

Released as a double feature alongside Grave of the Fireflies, My Neighbor Totoro seems to be the complete opposite of its companion piece. Generally peppy with a wonderful theme song that will stir your inner-child by singing “Aruko, Aruko, Watashi ha genki!” [1], even if you don’t speak any Japanese. Totoro followed the life of the newly-settled Kusakabe family, formed by dad Tatsuo (Itoi), elder sister Satsuki (Hidaka) and younger sister Mei (Sakamoto) who have moved closer to where their mother’s (Shimamoto) hospital is.

As Satsuki goes to school, Mei is left at home surrounded by a forest that seems filled up with magical creatures, including the mysterious Totoro who will aid the girls to cope with their mother’s disease.

I don’t think it matters how old you actually are to get going with your first viewing of My Neighbor Totoro, though it does seem to be Miyazaki’s targeted most towards younger kids alongside Ponyo. But whereas Ponyo had problems maintaining the attention of the adult viewers — people deemed it “too” infantile at times — Totoro seems to strike a chord with older viewers due to the storyline with the ill mother. It brings the dramatic elements that a lot of grown viewers can relate to — escapism as a child, growing responsibilities, sibling relationships — or maybe the idea of magical forest creatures is enchanting.

It seems almost redundant to talk about the visual style of Miyazaki and Studio Ghibli’s work, because throughout the years they have proved time and again that 2D animation is their art and business. The evolution of Ghibli’s characters have been maintained fairly consistent, almost to the point where a lot of anime detractors say that “all anime looks the same.” And if you could take a look at Totoro compared to a lot of animated flicks today, you could say that it still feels timeless. One of the most outstanding Ghibli characteristic is that it has largely avoided being influenced by pop culture, focusing all their might on folk tales or fantastic tales that could very well be placed in any time in history, enjoyed by a broad age range. And even in the case a film is set outside our time — that applies to Aladdin, The Emperor’s New Groove or most of Dreamworks animated films (except for The Prince of Egypt) — Ghibli’s authenticity has remained almost untouched. Maybe a virtue and a curse, if the economical struggles the company is going through are true.

The spirit of Totoro lives in the film, just as it does in every person who has seen the film and has fallen in love with it. Totoro lives in the forest and the people that have come together to help the Sayama Forest. After 25 years, the warmth and fuzziness that Totoro and co (Nekobus included) bring to our lives is undeniable, and will go on strong for many more years as its place in animation (and film) history is secured.

Thank you, Miyazaki, for giving us Tonari no Totoro.