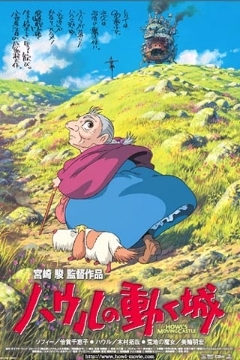 Howl’s Moving Castle opens with the incredible sight of the castle itself, emerging from the maze of fog and haze. And, as the title suggests, it appears to be moving. As this equally creepy and sublime contraption comes into focus, it starts to resemble something you’d expect from the mind of a Terry Gilliam or a young David Cronenberg, although it would obviously be hard to imagine them having the audacity to make an animated film with it. Comprising of a front (or is it the back?) that faintly resembles a human face, it features multiple layers and platforms with protruding windows and independently moving parts emitting gaseous contaminants and making all sorts of sounds—it’s simply one of the most indelible creations I’ve ever witnessed in an animated film.

The ninth feature directed by Japanese animator and manga master Miyazaki Hayao, Howl’s Moving Castle is set in the exquisitely designed steampunk world of late 19th century Europe. It primarily revolves around Sophie (Baishô), a shy and plain young girl who is initially witnessed at her family’s hat store. Her first adventure occurs when she is harassed in town by a couple of soldiers only to be saved by a handsome young lad who turns out to be none other than Howl (Kimura). On their way, they also end up dodging blobs of black goo sent in by the Witch of the Waste (Miwa), who harbors unrequited feelings for Howl. She eventually gets the better of Sophie by turning her into a 90-year-old woman, arched back et al. This predicament forces her to move away from town in order to seek help. She ends up in The Waste, a sort of no-man’s land between warring kingdoms where wizards and sorcerers are known to flourish. Once there, Sophie receives some unexpected help from a scarecrow, who also happens to be under a spell. He takes her to Howl’s castle where she introduces herself as a cleaning woman.

One of the great pleasures Miyazaki films tend to offer are the imaginative supporting “characters.” Howl’s Moving Castle doesn’t disappoint in this regard. There’s a talkative fire-demon named Calcifer (Gashûin), who is responsible for running the castle and knows it. We’re also introduced to a cunning youngster named Markl (Kamiki), Howl’s apprentice in wizardry. They help bring life to this fantastical world. Howl turns out to be a very wanted wizard—he’s not just claimed by the Witch of the Waste and Sophie, but also by Madam Suliman (Katô), his old master who wants his services in order to help her kingdom wage war. Howl’s past is gradually discovered along with his inhibitions that help determine the choices he eventually makes. Sophie stays along, caring more for the others around her than her own trapped state.

Loosely adapted by Miyazaki from a children’s novel written by Diana Wynne Jones, an Englishwoman who studied under the likes of C.S. Lewis and J.R. Tolkien, Howl’s Moving Castle proclaims its anti-war stance from the very start. Huge Victorian-era war machines, employed by selfish individuals blinded by greed and power, often invade the idyllic town and countryside.  WWII was reportedly a big part of Ms. Jones’s childhood, and now Miyazaki has updated her stance. During the promotional tour for this film in the U.S., Miyazaki told Newsweek after being asked regarding his reaction to the Academy Award won by Spirited Away that, “Actually, your country had just started the war against Iraq, and I had a great deal of rage about that. So I felt some hesitation about the award. In fact, I had just started to make Howl‘s Moving Castle, so the film is profoundly affected by the war in Iraq.”

Despite featuring some astonishing set pieces, many of the best moments in the film are small ones: whether it is Howl howling that he doesn’t want to live if he isn’t beautiful (after his hair-color gets screwed up thanks to Sophie) or the race on the castle stairs between Sophie and the Witch. The former joins a long line of enterprising Miyazaki heroines, who may not be “feminists” but they’re also far from the cutesy (“kawaii” [1]) characters that populate so much of Japanese animation.  It certainly takes guts to feature one who remains a nonagenarian for much of the running time. Howl, by comparison, is more conventionally drawn:  a beautiful, blonde, androgynous figure—he’s the stuff of everyday fantasy. There’s nothing ordinary about the film, however, a yet another remarkable display from one of the greatest minds animation has ever known.