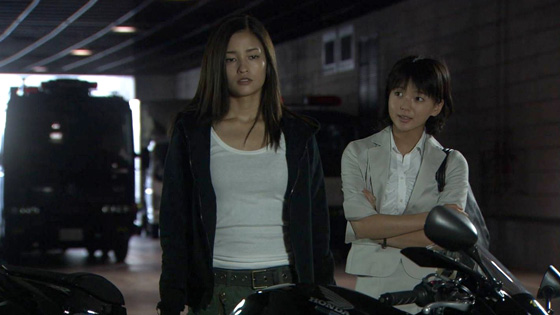 Jiu starts from the fantastical idea of two really hot detectives — and why would you deny yourself the pleasure of seeing Meisa Kuroki as brooding special agent, Motoko Isaki? She can do it all — fights off multiple men at the same time, beats her colleagues at anything, and even tackles men twice her size.

Then there’s Tabe Mikako as the sweet and overly naive Misaki Kadokura, special team member in charge of negotiations — to be fair, she does seem like a rookie, and really bad at negotiating. She can’t even get Motoko to talk to her. But she is such a sour grape — all she does is ride her bike with her boots on and shows up all sweaty when she fights or does weights.

Really, Meisa is really good looking, but she doesn’t look like she works out at all. This whole tiny situation with her muscle mass makes it a little too unbelievable. But to be fair, the whole special unit team looks a little weak on the muscle side, as if Michelle Rodriguez or even the delicate Maggie Q could give those guys a good butt kicking.

The story sets in motion after a failed kidnapping rescue attempt, in which the Juvenile department loses the victim and the ransom money. This is a huge blow not only to the force, but also to detective Azuma (Yukiya Kitamura) who was in charge of the case. The day of the failed mission, however, a mysterious blond young man (L from Kpop group Infinite) shows up before it all goes to hell. In a hostage situation, months later after the event, he shows up again stirring detective Azuma’s investigating bug once again.

In the meantime, as Misaki and Motoko get transfered to other departments, Misaki ends up working at the Juvenile department headed by Azuma, while Motoko ends up in an elite group where she meets the mysterious Takashi (Shirota Yu), who has been following Motoko around in a really stalker-y “I’m going to kill you” kind of way.

However, things are never as we suspect them to be… or are they? No, apparently not.

Though attempts to make Jiu a character drama surrounding a mystery were appreciated, the first couple of episodes are setup in a way that make it impossible to care about these characters as people, making us believe that the main point of the show is to find out who this mysterious non-talking blond guy is — in that case, let’s not include it on our character chart, shall we? Because once the name is anticlimactically revealed in the show, it seems we just spend five hours going about in silly banter and having Meisa Kuroki and Shirota Yu in bed a couple of times — nah, no harm done.

We know they’re trying to make character build up for the final confrontation, but it’s just not working. Shirota Yu’s Takashi just comes off as a very weak (and creepy) lead who is able to pull the strings on the sour grape Motoko. Their relationship seems too forced — and once again, extremely creepy — even if we are expecting something dark to come out of it — which it should, or Motoko would be a silly character.

Sorry, we’ve got little to say about Tabe Mikako’s Misaki or her character build up. Also, who wears a petticoat? It’s made such a big deal in the first three episodes, it seems we are obligated to mention it.