White: The Melody of the Curse 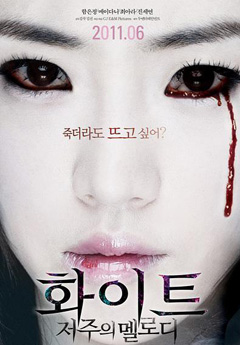 Anyone with minimum research skills that has shown interest in Kpop and the Korean music industry has found the reports of how crushing the world of teen idols is. Harsh hours of vocal training, dance routines, sometimes cosmetic surgeries to represent the ideal of beauty that often changes or simply fades.

The hard work that oftentimes never amounts to anything but years of pure training and little pay… just to be one of the selected few that become popular idols.

Indie directors Gok Kim and Sun Kim [Anti Gas Skin] take on some of the stories we’ve heard and give it a K-horror spin in their most commercial piece to date, White: The Melody of the Curse, which counts with a string of Kpop idols in cameos, and includes Eun-jeong Ham from girl group T-ara in her leading debut.

Though the film clearly adds elements from J-horror films like Ringu and Ju-on — or for you, anti-subtitle group: The Ring and The Grudge — the film’s strongest elements are its take on the Kpop industry while also working with it.

Ham plays Eun-joo who has been forever a trainee and never an idol, the oldest member of girl group Pink Dolls, who are still trying to make it in the world of idols. Time is ticking. In fact, the other Pink Dolls members — dancer Sin-ji (Maydoni), beautiful Ah-rang (Choi) and vocalist Jeni (Jin) — make sure to never let their elder forget that youth and talent are of the essence.

When Pink Dolls’ management moves to a brand new studio, gotten after the older studio burns down, Eun-joo makes a discovery of an old tape containing a catchy tune titled White with an awkward but interesting dance. Without being able to know who wrote the song and without worries, the management decides to take the song and make it Pink Dolls’ brand new single with a sexier image and a new lead. Rivalry arises even more between Sin-ji and Ah-rang who want to be leads ahead of Jeni.

Emotionally battered by her younger peers, Eun-joo gets together with her friend Soon-ye (Hwang), who used to be an idol but got away when she got the chance, and suggests she do the same before its too late. However, the release of White puts things on hold for both friends, as fans begin acting crazy in front of their new favorite idols and weird spooky things begin happening to each and every one of the Pink Dolls’ members.

Though the idea of making a horror film out of the music industry is a juicy one, smeared with scandals and lots of drama, White: The Melody of the Curse — with its mix of comedy, extreme drama, horror and less elaborate Kpop numbers — never leaves B Horror movie grounds. But if you love B Movies and Kpop, this one was full of laughs.