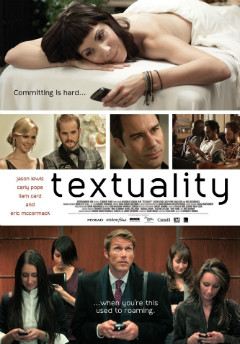 Ah, what can we do with the nightmare of the modern dating world. Texting, Facebook, Twitter messages… a long distance relationship? Well, you can Skype each other, mobiles on 24/7 as we flirt and “meet” people.

Textuality is sort of about that. The story of Breslin (Lewis), a fairly nice guy who was about to get married to his longtime girlfriend, Erin, until she leaves him at the altar. Breslin goes through his depression era, against his friend Michael’s mocking advice (Card). Michael believes Breslin should play the field, meet other women… doesn’t matter if it’s one overlapping the other, so Breslin begins relationships with three different women that some way fit what he thought was Erin.

One day, he runs over Simone (Pope) riding her bike, and there’s a spark.

Simone has her own complicated relationship, in which she’s involved with Clive (McCormack), a married man who’s never available, but a tiny part of Simone always wanted that to work. In the meantime, she’s involved in an open relationship with a computer programmer who happens to be a “germaphobe,” a basketball player, and a failed musician.

Just like how our daily life has become void of any real connection, Textuality feels cold. It’s labeled a romantic comedy, but it lacks any real romance, playing it more like a dramedy that has something to do with relationships… that are not very funny either. Lewis’ character is a little bland, women find him attractive because Jason Lewis is, in fact, attractive (remember him on Sex and the City?), but his character is boring. We’re told we’re supposed to feel sorry for him being dumped at the altar, but we never really know if he’s got a sense of humor, or what he likes, nothing- we don’t know him at all. He’s not even passionate about his work, so we’re only left with Erin.

The story with Simone is a bit different, but not much better. Pope plays her like our typical free spirited girl, she likes to paint, goes to life drawing classes on her antique bike (how hipster is that?), and her apartment is very artistic chic with brick walls, canvases, and colorful — but of taste — interior design. She blogs full-time, but we ever only see her write that one post of three lines, that should be some sort of life-altering motto.

Oh, and she hates texting. So he calls her.

Let’s not get started on the difference between cheating on someone and having an open relationship.