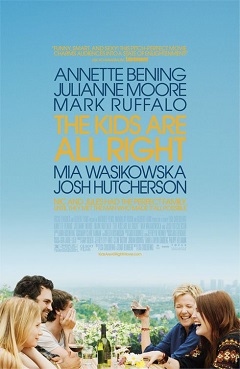 Lisa Cholodenko’s The Kids Are All Right boasts a very fitting tagline:

“Nic and Jules had the perfect family. Until they met the man who made it all possible.”

And yes, they were a perfect family at the beginning of the film. A married lesbian couple, Nic (Bening) and Jules (Moore), in love with each other and living in California, having more than enough money to live well off and raising their kids. Even better, they didn’t seem to suffer from the unfortunate problems that the LGBT community struggles with. Okay, maybe they did suffer before, but Lisa Cholodenko doesn’t need to let you know about it.

Things sounds good so far… until their young son Laser (Hutcherson) decides to find out who is his father, the one thing his parents never told him about other than the fact that he knew that he and his sister Joni (Wasikowska) were born thanks to the same sperm donor. The kids find out that their father is named Paul (Ruffalo) and he agrees to meet them and they have a good time. But when Paul meets their moms, a drastic change happens.

The Kids Are All Right shows how one variable can affect the stability of a unit and Paul entering into the lives of the family he helped to create succeeds big time in that regard. But his life also takes a huge change too. He never got to experience what it was like to have a family of his own and he quickly bonds very well with the kids and Jules, the latter leading to elevate an already existing conflict with the married lesbians — stuff about work, their attitudes and family issues — and it turns nasty for Nic, whose biggest fears start to shape when Jules ends up getting involved with Paul in an affair. Will their marriage last forever or not?

While the premise of the film seems very familiar and headed towards typical heavy drama areas — and there is a good amount of instability present — Cholodenko’s screenwriting provides a genuine sense of fun in watching The Kids Are All Right thanks to its great use of humor and very strong performances from the main cast, who live up to the well-written  and realistically flawed characters that they played as the image of the “perfect family” crumbles with Paul’s presence.

Julianne Moore and Annette Bening were excellent together in spite of how different their characters are — Jules is laid-back and artistic while Nic is all serious business — while Mark Ruffalo did a great job at playing the hippie-esque character with little regard for consequences, but still remains likable from start to finish. Mia Wasikowska had some great scenes in the second half with Moore and Ruffalo while Josh Hutcherson comes across as the film’s weakest link, but not because he sucked (he did good with his role and wasn’t unbearable to watch): everyone else is way more talented that he is.

While it is true that a good chunk of LGBT films tend to be artsy and depressing [1], The Kids Are All Right does have some sad moments in which the cast shined (especially Bening), but that doesn’t overshadow the film at all because Lisa Cholodenko made it very easy and fun to watch thanks to its talented cast and the solid screenplay.