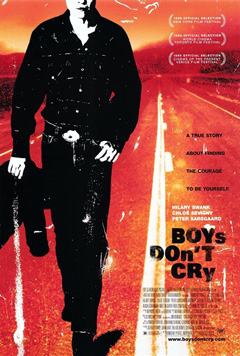 Boys Don’t Cry is an American crime-romance-drama film based on the real-life story of Brandon Teena, a transgender man who falls in love with a young woman.

Boys Don’t Cry follows Brandon Teena (Swank), a young female-to-male non-operative transgender man, whose birth name was Teena Renae Brandon. Bradon moves to a small town in Falls City, Nebraska shortly after being kicked out of his gay cousin’s (McGrath) trailer not due to his sexual identity, but because of Brandon having trouble with the law and fearing for his safety.

In Nebraska, Brandon is the popular new guy in town and befriends ex-convicts John Lotter (Sarsgaard) and Tom Nissen (Sexton), as well as their friends Candace (Goranson) and Lana Tisdel (Sevigny), who falls in love with Brandom because she has never met a more sensitive and considerate young man.

Life seems great for Brandon, as he’s now one of the guys and he’s dating Lana, but once his true identity is found out at Falls City, Brandon’s downfall begins and it’s not a pretty thing to watch at all.

Boys Don’t Cry, titled after a song of the same name by The Cure — a cover of the song appears during the film, takes some liberties in portraying Brandon’s real-life story in order to enhance the romantic aspect of the film, as well as changing some of the aspects the real-life characters had, which made most of the real-life people who were shown in the film criticizing it for what the film showcased, portraying most of the supporting characters as drunks and white-trash rednecks. The film also ust focuses in some of the points featured in the 1998 documentary The Brandon Teena Story. Doesn’t sound good, huh?

Putting the lack of accuracy aside, Boys Don’t Cry is a sad film to watch, yet it has enough good elements that makes the film shine very well in the romantic and dramatic aspects thanks to strong performances from Swank and Sevigny, with Swank standing out the most thanks to bearing resemblance to Brandon Teena in looks, cutting her hair and wrapping her chest to picture the real individual as seen in the 1998 documentary, and Brandon’s charm with women, as well as his flaws in regards to his true identity and the legal problems he had.

Also worth of praise is  the brutal beatdown and rape scenes in which Brandon suffered — easily the most memorable moment of the film. It was poignant and raw to watch, yet well-executed and believable thanks to Sarsgaard and Sexton showning intensity during the scene, and Swank showing the pain. It makes you really feel bad about Brandon and it can be depressing to watch and maybe even unbearable.

Still worth the watch thanks to Hilary Swank’s amazing performance that landed her an Oscar for Best Lead Actress. It’s easily one of her best performances in her entire career.

P.S: Don’t forget to check out the rest of the posts as part of the LGBT Blogathon 2011.