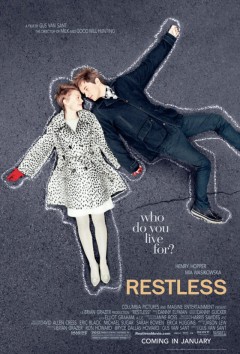 When I saw the trailer to this movie, I squealed with joy. It looked so cute and pretty, but somehow I didn’t give much notice to the sad undertone. Since it was several months between seeing the trailer and then watching the movie, I wasn’t sure what I was getting myself in to. But, it being a Gus Van Sant movie, how can it not but be good? Yes, Restless is very good but it’s also very heartbreaking.

Enoch Brae (Hopper) is that weird kid that has a ghost as a friend — Hiroshi (Kase). Annabel Cotton is that free-spirited young woman that has a fascination with birds. They meet at a memorial and soon become friends when they find their common ground — they are both slightly quirky, open-minded and have a fascination with death. After becoming friends, they become lovers, the romance is cute and slightly naive, never mind the fact that Annabel has roughly three months to live. Cancer.

I believe that I previously explained how I rate a movie depending on the amount of tears I shed (if I shed them). Well, with Restless I cried and it was both sweet and sad. I, who have many issues when it comes to death, was left with many thoughts about it, but somehow, for a moment, I found beauty in the end. That is how well Gus Van Sant dealt with the issue and how lovely Mia Wasikowska and Henry Hopper delivered the story. It was executed with so much love and respect that, for me this was one of the best movies of 2011.

What I love most about this movie is how they dealt with death. From the fear, to the sadness, to the acceptance. It was never cliched nor cheesy. It was all executed in a very logical yet calm way. There were no huge speeches nor proclamations of love. It was all very mellow, as mellow as Annabel and Enoch are. Mellow but with that small smile that indicates that everything will be fine, with scenes filled with warm autumn palettes, the story was as beautiful as what we saw. All that beauty became a vessel that somehow got under my skin and was etched near my chest. Like a sea that is tranquil but slowly rippling because of the air. That is how Restless felt.

I guess I am getting a bit sappy, but Restless is that kind of beautiful movie that always will be in the back of your head. That kind of feel-good movie that you will want to watch when you are feeling a little sad because it will make you cry yet make you feel alright.

Partly the lovely work of Gus Van Sant, partly the lovely work of the actors who had such chemistry with each other, you felt a deep and warm friendship brewing all around. Hiroshi was a delightful character that was the glue of the story — Ryo Kase did a wonderful job. Also another bonafied hit for Wasikowska, who exploded in 2010 with Alice in Wonderland and has since starred in critically acclaimed movies (The Kids Are All Right, Jane Eyre, Albert Nobbs).

I will keep my eyes out for Henry Hopper, this is his first feature film and he left an impact.