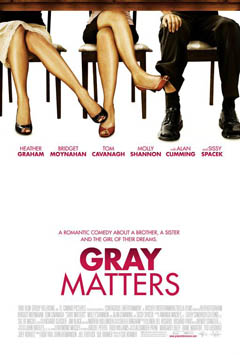 I’ve seen Gray Matters a couple of times on television, and I’ve been trying to figure out why the movie didn’t sit so well with me. I felt I kind of liked it (which explains watching it more than once), but I couldn’t pinpoint why I didn’t like it. Then, I got it. Gray Matters was sold to me as a romantic comedy, it was sold as a coming out romantic comedy, and it isn’t.

The story begins with siblings, Gray (Graham) and Sam (Cavanagh) are the best of friends… they REALLY get along with each other and seem to be split from the same egg because they have a lot in common. They get along so well that people sometimes think they’re dating- ew! One day, at the park, where they’re trying to pick single people up, they meet Charlie (Moynahan), whom they sort of asked out all together. After a grand time together, and Sam trying to get rid of his sister to hit on Charlie some more, Sam tells Gray that he’s getting married to the girl over the weekend.

Through their Vegas weekend and as Charlie’s last days as a bachelorette, Gray and she had a drink too many which results  in some innocent kissing that freak Gray out. Even though they both meet Charlie at the same time, and her romance with Sam goes a little too fast — who goes for the significant other of their brother (and best friend)? That just smells like trouble, especially when your brother’s now-wife doesn’t seem to remember anything of the incident at all. In fact, she’s clueless about you.

Though presented as a romantic comedy, Gray Matters isn’t about the romance and isn’t so much about the coming out process, other than that speech in the elevator. It’s about the struggle between Gray’s love for her brother and her now recent attraction to Charlie. I just wish the drama between the siblings had been better developed, as it just feels a bit rushed. It doesn’t help that Graham and Cavanagh’s acting don’t always feel natural — then again, I’ve never been a big fan of either of them.

The supporting characters aren’t really used, for example Molly Shannon’s wacky cracks and Sissy Spacek’s bizarre therapy sessions are there, but don’t really help much to develop Gray or move the plot forward. Though Alan Cumming’s taxi driver works, and it’s always great to see him in drag. I wish he could’ve played Charlie, except I would need to re-cast Gray and then it would probably be a completely different film.

Visually, the film is a little flat. But really not the worst from the pseudo-genre.