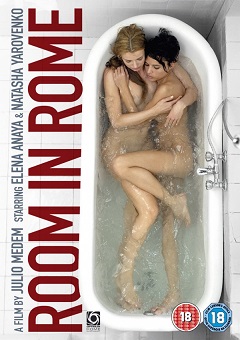 Room in Rome doesn’t have much of a plot to begin with, but the film sets itself in Rome and has two strangers — Alba (Anaya) from Spain and Natasha (Yarovenko) from Russia — meeting at a bar. After a few drinks and some playful conversation, they end up at Alba’s hotel room. What started off as a one night stand ends up evolving into something more intimate as time passes by.

And by “more intimate“, I mean that we’re  getting the chance to see Elena Anaya and Natasha Yarovenko — two gorgeous women — naked and having intimate sex for a good part of the film as well as learning about their lives.

For two hours running, Room in Rome lives up to its title as nearly everything takes place inside the hotel room, with very few moments taking place on the room’s balcony. The direction from Julio Medem takes a detailed, creative and nice approach regarding the camerawork, showcasing different angles in spite of the limitations that come with only having one place to shoot. While the film’s main draw is the sex scenes without any doubt, two standout scenes are noteworthy for their symbolism. One happens through the girls viewing the paintings inside the room, which aims for the love angle. The other one happens when they proudly hang their white bed sheet on the empty flagpole that stands side-by-side with the EU and Rome flags. As for the screenwriting, however, that aspect of the film comes across as very uneven.

From the start, it’s clear that Alba and Natasha are strangers to each other, and at first they just enjoy each other’s bodies. But as they spend more time together, they start revealing more about their true selves through their past stories and use of technology devices. When they figure out that they’ve been lying to each other, drama ensues. The biggest problem with Room in Rome, along with poor pacing and an odd use of only one song (which got tiresome quickly), is that these shifting stories weren’t too well polished at all, making an already dialogue-heavy film pretty confusing to watch. And the film’s ending deserved better.

Acting-wise, Elena Anaya does a hell of a job carrying the film and showcasing different emotions throughout Alba’s time with Natasha. Yarovenko doesn’t seem as impressive as Anaya acting-wise, but she fared decently in the role of the mysterious woman who started off as heterosexual and later finds herself attracted to a lesbian. Both pulled off the intimacy required for the film well in spite of the film’s flaws regarding the plot treatment.

Room in Rome may not be a highlight for LGBT films by any means, but Medem’s camerawork and the commitment from both Anaya and Yarovenko is undeniably solid and makes it watchable. But I still have to ask: if this film was headlined by two non-good-looking women, would it work with all its virtues and flaws?