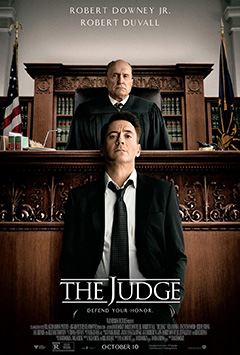 A lot of people have been complaining about the appeal of The Judge, but let me tell you that after watching the trailer once during Gone Girl, my mother ended the movie saying she wanted to watch the RDJ movie when it came out, and so upon opening week, we did.

Robert Downey Jr. plays the cheeky wiser-than-thou lawyer called Hank Palmer, famous for big guilty clients whom he sets free by playing and bending the law as he points out to D.A (?) Kattan (David Krumholtz). About to start defense of another big guilty client, Hank receives a call from his brother, Glen (D’Onofrio), who informs him that their mother had passed away in the morning. Torn and conflicted about going back to a place he never actually wanted to return to, he leaves for Carlinville (Indiana), leaving behind his baby girl (Emma Tremblay) and a pending divorce from wife Lisa (oh, hey there, Sarah Lancaster).

Back in small town Indiana, he gets bitterly acquainted with a lot of witty snark to his old life- his brothers Glen and Dale (Strong), ex-girlfriend Samantha (Farmiga) and stern dad Joseph Palmer, long-standing judge of Carlinville, who gets accused of running over (and killing) a man he had sentenced to 20 years in jail that had just been released. Did he do it? Why can’t he remember a thing? That’s what D.A Dwight Dickham (Thornton) will try to figure out and prove as father and son reconnect and learn more about each other.

I thought that I might need a Kleenex (or a pack of’em) when watching The Judge, considering that the trailer might have made me almost tear up. Though my dad did visit me in dream-form today to maybe prep me for the emotional turmoil, and Downey Jr. and Duvall hit all their emotional queues to perfection, the emotional tug never reach the point of breaking. I’m sorry, I love crying in movies now. LOL I felt a lot of the best bits were on the preview, even if the film has charm on its own with Farmiga adding a little bit of lightness to the tension between the Palmers, and a storyline that never pans out but surfs Oldboy levels of discomfort.

Considering the film is over two hours, the pacing seemed agile though a little guided. Schenk’s Gran Torino had some of the same, but The Judge never stops being amusing or emotive especially for anyone who’s had to live through the slow loss of a parent. My biggest question is how did this get a $50M budget? It’s neither riddled with special effects nor it’s outstanding in its technical achievements, I find it difficult to see it recovering it’s money back considering flashier movies like *cough* Fincher’s *cough* was made for $60M (which I still think it’s a lot), The Hundred-Foot Journey (closer to the target audience for this type of story) was made for $22M, and -I suppose- Favreau’s Chef… for which I couldn’t find any numbers but it’s touted as a successful low-budget movie that’s made $46M.

Does it have life? Definitely as repeat TV viewings. I do see a lot of Golden Globe potential (Oscar? Not so sure~) for acting nods in the comedy section. Though I’m unsure whether Birdman will be considered comedy; Ralph Fiennes, Michael Fassbender, Mark Ruffalo, Om Puri and even Favreau are looking good for the category.

When I asked my mother if she liked the movie, she said: “I liked it better than Gone Girl. Both were technically good, but I’ll take this one because of the ending.” I still don’t exactly get why both movies get compared to each other.