Fault In Our Stars, The 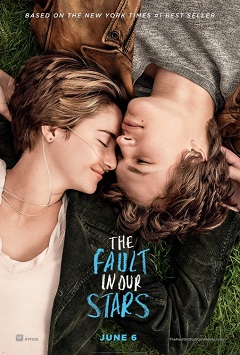 I have yet to see Divergent, which happens to star the same lead actors from the film adaptation of John Green’s best-selling novel. But I can tell you that Josh Boone’s take on The Fault in Our Stars turned out to be a surprisingly enjoyable film to watch.

The film follows Hazel Grace (Woodley), who has been struggling with thyroid cancer for several years, which has worsened and spread to her lungs. During the opening minutes, she admits that she dislikes attending support groups meetings and prefers being alone, but she does it anyways just to please her mom (Dern). One day, she ends meeting and befriending fellow cancer survivor Augustus Waters (Elgort), who will end up being highly important to Hazel’s life.

Along the way, Gus and Hazel grow closer than ever, even as their disease continues to impact their lives. A big part of their story includes a trip to Amsterdam in order for both to meet Peter van Houten (Dafoe), the author of Hazel’s favorite book, An Imperial Affliction, and get answers regarding the book’s ending.

The Fault in Our Stars is mostly a love story between two people who happen to be struck by a deadly disease. While the film renders a pretty good yet sad story (spliced with humourous bits and moments) and some inevitable clichés regarding the romance angle, The Fault in Our Stars is a surprisingly solid film thanks to the really great performances from the cast that rises above some of the film’s credibility-stretching issues. The chemistry between the lead actors is endearing to watch and the moments they share together are sickly sweet for the most part amidst their deathly settings. However, Shailene Woodley is phenomenal to watch on her own in spite of her great pairing with Elgort since Hazel displays a coming-of-age story with her growth into adulthood, her relationships with her parents as well as her feelings towards Gus; all of that being done despite knowing she doesn’t have much time to live and she worries about how her absence will affect those surrounding her. Woodley’s strong performance came across as very geniune on the screen in both the good and bad moments that Hazel goes through.

The rest of the cast fared well. Ansel Elgort had a star-making performance with a character that oscilates between jock and nerd, but really sweet and charming to watch when it comes to Augustus’ relationship with Hazel. Willem Dafoe was fine as van Houten, who turned out to be something different than what Hazel expected to be based on email communications. Nat Wolff fared alright as the blind wisecracking cancer-ridden Isaac, however Sam Trammel as Hazel’s dad didn’t got to do much of importance in the film — even Lotte Verbeek as van Houten’s assistant stood out more than Hazel’s dad. Unlike Trammel, Laura Dern as Hazel’s mom made a big impact on screen as one would expect from her. Dern’s subtle performance as the positive yet worrisome mother throughout the film turned into something raw and stellar near the end of the film when Hazel finally confronts her parents about her impending demise. Dern’s delivery of a line that tackles the subject of parents losing their children is easily the film’s strongest and saddest moment.

I wished the editing for certain scenes fared better. The scene with the crowd applauding the young couple kissing after making it to the top of the Anne Frank building felt out of place. I understand that it works since Hazel had some struggling to get up there — she uses an oxygen tank at all times and heavy physical activity affects her — but it irked me in the same way that self-congratulatory scene near the end of Dallas Buyers Club did. Other scene that made all three cancer characters briefly unlikable [see: revenge on Isaaac’s ex] didn’t work well because of a lack of exploration regarding Isaac and his ex. And some of the dialogue comes across as cheesy sometimes, but nowhere near as criminally cheesy as the first half hour of The Notebook. But if you can get past those flaws, you end up being rewarded with a very sweet and well-acted film.

Easily one of the biggest surprises of the year for me. And a pretty great film for younger audiences, if I may say so.