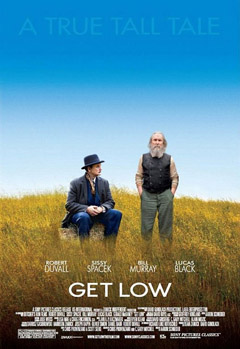 Get Low tells the story of old Felix Bush (Duvall), who’s known as the hermit of a tiny town in Tennessee in the 1930s. The kids treat him like an urban legend, and everyone in town have their own stories and theories about the old crazy man living in the woods.

Upon hearing news of someone’s death, old crazy Felix decides to throw his own funeral party, hiring Frank Quinn (Murray) and Buddy (Black) from Quinn funerary to arrange the event and listen to people tell stories about him, because he can’t tell his own.

Duvall gives a good performance, between crazy and funny in some very dramatic situations. Though the beginning of the film brings a lot of promise, and the middle of the film carries quite well, the ending of the film seemed quite… not there. It was a logical ending, but not as emotional. We actually didn’t feel anything.

Sissy Spacek plays a tricky character. We don’t really get to know much about her, but we still feel awful thinking of what her character had to go through. All in all, Get Low has a bit of good acting going on here, and that wonderful ending credits song Lay my Burden Down by Alison Krauss — is it eligible for an Oscar?