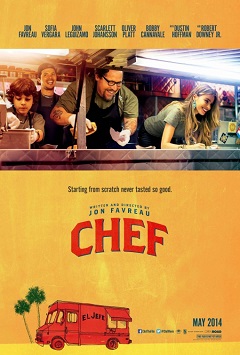 Fine, I’ll admit that’s a dumb question. Chef has Jon Favreau as the director, writer and star of his latest directorial effort, which not only deals with the love for food, but it simultaneously deals with the passion for cooking as well as showcasing a father-and-son reconnection storyline.

Chef follows Carl Casper (Favreau), a professional Chef who works in a prominent LA restaurant that has mostly stuck to the basic menu for their success thanks to restaurant owner Riva (Hoffman) playing it safe despite Casper’s attempts at trying to innovate the menu’s offerings to no avail. However, a visit from respected food blogger Ramsey Michael (Platt) ends up with Carl hitting rock bottom, getting his work (and reputation) shredded to pieces by Ramsey and, following a rage-driven moment that doesn’t end well for him, quitting his job after Riva doesn’t see his point of view. This sets up Carl for a shot at redemption and reinvent himself professionally from scratch.

Carl isn’t alone in his redemption story, as he relocates in Miami and receives help from his ex-wife Inez (Vergara), his son Percy (Anthony), line-cook and best friend Martin (Leguizamo), and also Inez’s ex-husband Marvin (Downey Jr., in a amusing cameo) in order to kickstart a food-driven (and business-driven) road trip that ends up changing Carl’s life, and most importantly, a big chance to repair his relationship with Percy, whom was neglected by his father often due to his previous job consuming his time.

Chef is without any doubt a feel-good film driven by the love for food, friendships, the passion for your craft (cooking in the film’s case), the reconnecting among family members and the heavy use of social media to promote business affairs. It boasts a pretty good use of its cast and it’s actually a fun and charming journey to sit through thanks to Favreau’s Casper being relatable and pretty funny to watch. Favreau performs well as the lead and takes his time layering and balancing all the acts through the script — you could even say Chef mirrors Favreau’s directorial career, sort of — but he doesn’t hog the spotlight all by himself since part of the road trip also shows Percy growing up and learning the ropes around the cooking business as well as Carl’s friendship with Martin and the delicious food shots.

Chef is mostly a mens’ adventure, which means its female cast isn’t used too often on screen. Vergara’s Inez mostly roots and cares for her ex-husband and son while Johansson’s Molly, who is Carl’s co-worker/friend with benefits, mostly marvels at Carl’s skills. To Favreau’s credit, he didn’t stereotyped Vergara like her Modern Family character. But if both had been developed as actual characters, Chef would have gotten some extra bonus points. But expanding Vergara’s character could have possbily added a romantic angle and maybe clash against the father-and-son storyline Chef presented, which was one of the film’s highlights. There’s some confilct in wishing for different things for the better.

This year as far as food films are concerned, Chef stands out well alongside Lasse Hallstrom’s The Hundred-Foot Journey. I have them rated equally since neither reach the recommendation tag (just barely) and both deserved better endings, but they’re pretty entertaining to watch nonetheless. Favreau’s film has a all-around better use of its supporting cast and it doesn’t feel quite overlong to watch as a whole, not to mention it’s less cheesier and Chef‘s “passion for your craft” story has a universal relativity. However, I’ll put Hallstrom’s film slightly ahead of Chef thanks to its superb lead actors, a much better use of humor/comedy/, and for being a better overall foodie-film package (because food really matters).